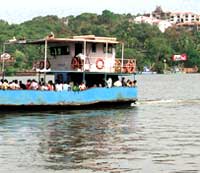 the recent decision of Karnataka State Cabinet to go ahead with the Khalsa-Bandhura project on river Mhadei and the subsequent laying down of the foundation stone on September 22 at Kanakumbi village in Khanapur taluka of Belgaum district, despite strong protests from the Goa government, has initiated a bitter battle between both the states. Whereas Karnataka seems adamant about going ahead with its proposed plan, Goa is trying hard to put pressure on the centre to stall any further progress on this controversial project. According to Ramakant Khalap, spokesperson for the ruling Congress in Goa, the state cabinet has unanimously decided to take an all-party delegation to the prime minister and agitate by all legal means to stop Karnataka from making any headway.

Meanwhile, the Goa government petitioned the Supreme Court of India on September 26 asking for an interim stay on the project and the setting up of Mandovi Inter-State Water Disputes Tribunal under the Interstate River Water Disputes Act, 1956. However, the court quashed Goa's hopes on September 28 when it refused to grant an interim relief because of a caveat filed by the Karnataka government preventing any ex-parte interim relief. The apex court has, meanwhile, issued notices to Karnataka, Maharashtra and the centre for a hearing on October 19.

As per the original plan of the Karnataka government, the construction of seven dams and three hydro-electric power plants are proposed by diverting Mhadei's water to its own dried-up Malaprabha river. The Khalsa-Bhandura project envisages transferring nearly 7.56 thousand million cubic feet of water from the Mhadei basin to Malaprabha basin for meeting the drinking water needs of Hubli and Dharwad districts of Karnataka.

The Mhadei controversy has been lying dormant since April 2002 when the Centre's water resources department accorded an "in principle clearance" to Karnataka. The scheme, however, could not proceed because the then Bhartiya Janta Party government of Goa approached the incumbent prime minister in June 2002, leading to freezing of any further developments. But the recent move of Karnataka government has reignited the controversy.