Goa mine workers take to the streets

Over 100,000 people in the state affected by suspension of mining activity 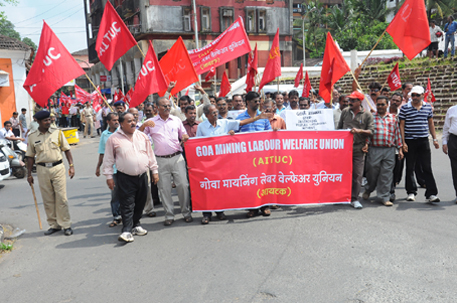 Mine workers in Goa took to the streets on Thursday to demand resumption of mining activity in the state. Led by the Goa Mining Labour Association, some 4,500 mine workers staged a big rally at Azad Maidan in Panjim in the afternoon.

The tiny state has been in turmoil after the state government and then the Centre   suspended all mining leases in Goa. About 100,000 people, who constitute one-third of the state's population, are directly or indirectly dependent on the mining industry for their living.

Christopher Fonseca of the labour association said that his organisation is demanding immediate resumption of mining activity since the livelihood of a large number of people is at stake. He said the mines operating legally should be allowed to resume activity immediately while the illegal mines should be brought under the control of the public sector and also made operational at the earliest.  He said that a resolution to this effect was passed at the rally and that it has been forwarded to the chief minister, prime minister and the Union Ministry of Environment and Forests.

There are others who are do not want resumption of mining any time soon. Non-profit Goa Foundation has filed a public interest petition in the Supreme Court, demanding the court stay resumption of iron and manganese mining in the state. The petition also demands that the mining scam in the state, worth about Rs 35,000 crore, be investigated by an independent agency. Claude Alvarez of Goa Foundation said that the state government is not taking the issue seriously and is implementing only five per cent of the Shah Commission report  recommendations. He said that the government must cancel the leases of all erring mining companies and hand them over to public sector companies to operate as a transitional step.

He said that given the Shah Commission report findings on over-extraction of minerals, staggering of mining operations in the state is inevitable. “There is likely to be a cap of 10 to 12 million tonnes per year on mining. In this scenario, allowing private mining companies to operate will result in huge struggles for grabbing maximum shares of the mining bonanza,” Alvarez said. He added that the people of Goa have invested Rs 2,200 crore in the mining industry in the form of barges and dumper trucks purchased. In the absence of mining activity, the owners of these trucks and barges will be hit hard. He demanded the government announce a holiday on payment of loan instalments on trucks and barges till mining resumes. He also offered to help truck and barge owners file court cases against mining companies. He said the companies should be made to pay since it is their illegal activity that has caused the crisis in the state.