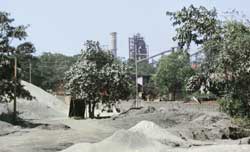 on october 6, 2006 the Goa State Pollution Control Board (gspcb) shut down five sponge iron units -- Jain Udyog Ltd, Shraddha Ispat Pvt Ltd, Srithik Ispat Pvt Ltd, Goa Sponge & Power Ltd, and Ambey Metallic Ltd. The closure notices, issued under Air (Prevention and Control of Pollution) Act, 1981, and the Water (Prevention and Control of Pollution) Act, 1974, state that the units have violated prescribed environmental standards and the conditions laid down in the consent order. They will remain closed till further directives.

While upholding the decision , on October 10, the Panaji bench of the Bombay High Court directed the collector of South Goa district to ensure strict compliance of the order.It is now hearing writ petition number 7 of 2005 filed by a group of villagers against Jain Udyog's plant -- with a production capacity of 100 tonnes per day (tpd) -- at Santona village, Sanguem taluka, South Goa district (see 'Shifting pains' , Down To Earth, March 31, 2006).

gspcb claims that in spite of repeated warnings these factories regularly flout rules causing extreme pollution. On September 12, the board issued show-cause notices to these companies asking for technical details on the installation of flyash brick units to dispose off their solid waste, as mandated by law. During a recent inspection the board officials found further violations. Jain Udyog was found storing excess coal, a raw material, within the factory premises and burying 20 to 30 tpd flue dust/slag within the compound. Flyash was being dumped at nearby Dharbandora village, nearby, causing pollution and health worries. A gspcb team caught Srithik Ispat discharging solid raw material into a nullah in Cortali, a small town in Sanguem. Residents have complained for many months of the effluents. Ambey Metallic was also dumping flyash within factory premises.

Factory owners allege they are being unnecessarily targeted. Shraddha Ispat and Goa Sponge & Power Ltd say brick units will come up by end October. Srithik Ispat and Ambey Metallic have set a deadline of November and December, 2006. On being contacted, gspcb officials refused to comment saying they are "under tremendous pressure to reverse their October 6 decision". Environmentalists and local villagers, though, feel victorious.