Goa's citizenry make themselves heard at a mining public hearing

On January 31, in the community hall of South Goa's famous Shantadurga temple a public hearing is convened to discuss the renewal of mining lease to Shakti Bauxite Mine. The company currently operates on a small part of its concession area some 26 ha. It has applied to the state pollution control board for permission to expand its operations to 826 ha, and its production from 0.1 million tonnes to 1 million tonnes a year. The rapid environmental impact assessment (eia) and environment management plan document prepared by Sankalpana, a local consultancy firm, says the project will be spread over six villages, Betul, Naqueri, Morpila, Velim, Fatorpa and Quitol, in South Goa. The last time the statutory public hearing was convened, it was called off for fear of trouble. This time again, police presence is heavy. Even though the notice for the public hearing was given only two days ago--against the statutory period of one month--the turnout is heavy.

Chandrakant Kavlekar, MLA, Quepem
"If the current production is creating such enormous problems, imagine the impact of mining 1 million tonnes each year. The pollution control board and other agencies must see if the company has complied with norms in its mines.If current practices violate laid-down conditions-as we know do-why should we believe the company will meet conditions for environmental management in the future? More importantly, if the permission is given to expand the mine but the company does not adhere to the conditions laid down in the clearance, do we have the right to stop the mine?"

"The company says in its report that there are no streams and that its operations will have no impact on our water. But then how does it explain what its limited operations have done to our lives? Our streams have dried up; forests have been cut; the silt from the mine reject flows into our waterways and fields. The company says its technology for blasting is foolproof. But how does it explain the cracks in our houses?"

"We totally oppose this mine."

Ulhas Gaonker, representative, Morpila Bachao Samiti, a group of affected villages
"We also oppose the mines and dispute the findings of the environmental impact assessment. The report says that though the lease area falls in five villages, there is hardly any settlement in the lease area. The land on which the mines will operate is private farm, communidade or forest land, the villages use. The report itself admits that 16 ha in the core area (area to be mined) are under settlements, but does not mention anything about rehabilitation. The most amazing fact is that the project proponent says that no Scheduled Tribes live in the villages. Even according to the census, 50 per cent of the people in Betul are tribals. The company is misrepresenting facts. The reason is that the Panchayats Extension to Scheduled Area (pesa) Act, 1996, provides that land in tribal areas cannot be transferred."

"The report says that rainfall in our area is 3,200 mm but does not explain how soil erosion from the rejects and pollution of our streams will be checked. It says there is no surface water body in the core and the buffer area but contradicts itself when its land-use plan shows a nulla (drain) .... The movement of trucks carrying bauxite is making our lives hell. In the entire report, which talks about air pollution and draws diagrams to show wind direction, there is not a single mention of the impact of transport of minerals. What will happen when the number of trucks increases?"

We reject the environmental impact assessment report, which is patently false, and say no to the mine.

Fondu Velip, tribal resident
"We are completely dependent on the land. If the land is taken away our culture dies, we die. If our forest is taken away, our agriculture cannot survive. We grow chilly crops but our manure comes from the forest. The land you call wasteland is used by us for grazing our animals and even for cultivation. We are sad that when we wanted rights to build a small village road through the forest, we were denied permission. But now we are told you have been given rights, not just to the forest, but to cut it down."

"When the forest department grows cashew plantation on its land, it gives us employment. What will happen when you take away that land for mining-we will not survive. It is for this reason every member in my village has said that we will fight the miners."

Henry De Souza, priest
"I find cases of asthma are growing and this fact has been corroborated by medical findings of local doctors. We want to live on our land; we want the right to a healthy life. Is this too much to ask?"

[The eia report mentions, on page 33, that people are healthy, but on page 71 it admits that in the mining areas exposure to dust, gases, noise and vibration will lead to problems.]

Subhash Phal Dessai, member, district council
Phal Dessai looks straight into the video camera-the public hearing under the new notification has to be filmed-and asks, "Will the people in Delhi, who see this film and then clear the mine, understand Konkani? Will they understand our reasons for rejecting this mine; that we are all against it, one and all?"

He then asks the audience, "Who is for the mine?"

Pindrop silence follows. Not a single hand is raised.

"Who is opposed to the mine?"

All hands go up.

The point is made the camera does not turn to take this shot; it is facing the speaker, not the audience. 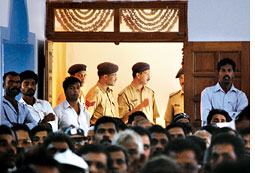 Speakers opposing the mine continue to rise. Additional Collector Prasanna Acharya has to ask, "Is there anyone who wants to speak in support of the mine?"

A man gets up and introduces himself as Prashant Phal Dessai, a transporter. "We are only for mining in the present area; not expansion." Shivram Dessai, another transporter, says they want to be compensated. "We are not for the mines, but we must not suffer."

The last word is with the company rep. He keeps it short (not sweet) "We have all clearances from government agencies and we're sure they will ensure the issues raised are taken care of."