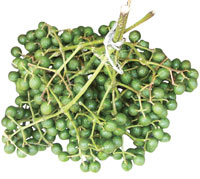 A bunch of green berries looks too delectable for a spice. In fact, the temptation is to bite into them. Yield to it, and you will not be able to taste anything all day—the sizzling sensation in the mouth will keep you salivating profusely for hours, as this scribe found at her own cost. That was not a promising introduction to the spice, but in a Goan kitchen the pungent teppal or Sichuan pepper (Zanthoxylum rhetsa) is as indispensable as salt. Without it the signature fish curries of the region would not taste right.

In rural Goa, nearly every third household has a tall thorny teppal tree in its backyard. Since just a few berries are enough for a family’s year-round need, one tree keeps several families supplied with enough teppals. The green berries, also known as triphal, are harvested in August-September, and dried in shade till they split open. The seed is then discarded and the pods are stored.

In most dishes, both vegetarian and non-vegetarian, teppal is added either as whole or coarsely pounded when the dish comes to boil or is nearly done. It is important to let the dish sit for at least half an hour. This allows the spice time to release its distinct flavour.

Goans mostly use teppal in foods that are difficult to digest—beans, lentils and coconut, for instance. The pepper is said to have digestive and anti-flatulent properties. Ankush Naik, resident of Revona village in South Goa, who showed Down To Earth how to prepare a few teppal dishes, says three to four decades ago, the berry was a household remedy for stomach problems, especially in children. A mild decoction of the fresh or dried pods was administrated in case of colic, diarrhoea, dysentery and constipation. Ulhas Raikar from the neighbouring Kevona village says the Portuguese used to administer the decoction of fresh teppal as enema in case of severe constipation in children and the elderly. “It was also mixed with other ingredients to cure several other ailments, but the recipes were kept secret by the elderly,” he adds.

Modern medical research substantiates their beliefs. Researchers with University of Dhaka’s pharmacy department have found antinociceptive and antidiarrhoeal properties in the extract of teppal’s stem bark. Another research by Mae Fah Luang University, Thailand, this year reported anti-bacterial compounds in its root and bark extracts.

With improved medical facilities, its medicinal uses have lost currency, but the berry is unlikely to lose its value as a culinary ingredient. Also a cherished spice in Mangalore, teppal is the primary ingredient of the Chinese five-spice powder. “Our curries have a strong sweet-sour taste, and teppal is just the thing to balance the flavours with a pungency that makes a curry interesting without making it mouth-burning hot,” explains Naik. “One can eat it without fear of tummy troubles.”