Gods feel the pinch too 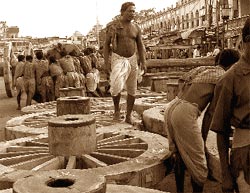 an ecological crisis resulting in scarcity of wood has placed the sacred Jagannath rath yatra (chariot journey) of Puri in jeopardy. Wood is an integral component of the rituals associated with the yatra. But lately, the divisional forest officers responsible for making the required quantity of wood available have expressed reluctance in doing so.

People from across the country flock to this coastal town of Orissa every summer to witness the yatra. Twelve rare varieties of trees are used for constructing the three huge chariots and the images of the three deities -- Jagannath, Balaram and Subhadra -- they house. Around 1,130 big logs are required for the construction of the chariots alone. After the festival, the chariots are dismantled and the wood is used in the temple's kitchens.

"We need not worry about the logs. Shortage of wood has never impeded the car festival. We have explored only one district of Orissa (Nayagarh). There are 15 other districts which could supply the wood for another 100 years," claims Ramchandra Das Mahapatra, member of the Chariot Construction Committee. But forest experts say Mahapatra's optimism is misplaced, as forests in other districts are neither dense nor very well protected.

Wood is also used for preparing food in the temple. The casuarina tree is the chosen variety but it is disappearing fast. "To prepare 56 varieties of food for nearly 30,000 people, we use 8.5 tonnes of wood in the kitchen everyday. During the rath yatra, the daily consumption of wood increases to 25 tonnes," says Managobinda Samantray, president of Suar Mahasuar Nijog, a body of over 1,000 priest-cum-cooks. But Samantray rues that procuring this wood has become very difficult now. The Nijog recently suggested the creation of forests to meet the wood requirement. But this does not appear practicable, especially as a similar government project has already failed. The Rs 650 million Jagannath Bana Prakalpa was launched in 2000. The forest department planted trees in a 2,800-hectare area along the Mahanadi River but hardly any trees are seen now.

Tapan Padhi of Regional Centre for Development and Cooperation, a Bhubaneswar-based non-governmental organisation working in the forest sector, suggests entrusting forest protection communities with the meeting the temple's wood requirements.

The ecological crisis in Puri has other manifestations too. Ikan Bisoi of Kumbhakar Nijog, an association of traditional potters, says: "You cannot find suitable soil for earthen pots and the wood for burning the clay has also become expensive." Nearly 45 per cent of potters are said to have abandoned their profession.