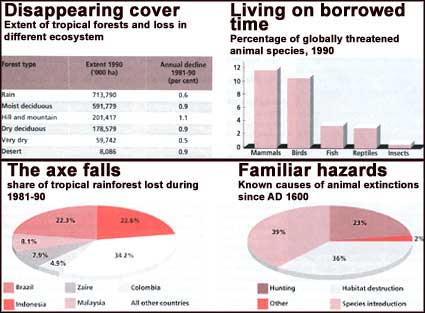 EVEN as debate on conservation of biodiversity gathers momentum, tropical forests which account for between 40 to 90 per cent of the world's biodiversity, seem to be fighting a losing battle against deforestation. According to the report People and the Environment, released recently by the US-based World Resources Institute, the current rate of biodiversity loss driven by anthropogenic factors. The report, based on studies carried out by the Food and Agricultural Organisation (FAO) and the World Conservation Union (WCU) Found the tropical forest areas are shrinking at the rate of 0.8 per cent each year. Between 1980 and 1990, 154 million hectares of tropical forests equivalent to almost 3 times the size of France have been converted to other land uses. Primary research shows that the rates of deforestation have have actually increased during the 1980's.