As land is siphoned off for private buildings, Goa is becoming another urban disaster 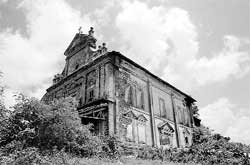 GOAN architects are getting warning signals from professional counterparts, that their small and still-charming state could go the chaotic Mumbai way. Mumbai has the distinction of being the 'second-worst' city in the world in terms of noise pollution. "It should sound a warning bell. What happened there is bound to happen in every big Indian city," said architect and former Mumbai metropolitan regional development authority director Chandrashekhar Prabhu.

Prabhu was only one of many architects, sanitation experts and environmental campaigners who were recently invited to discuss with concerned Goan architects on how best to retain the charms of this holidayers' paradise.

Prabhu pointed out that four ha of 'amenity space' has been recommended for every thousand city-dwellers. But Delhi has only about two ha, with even lesser area in Calcutta (1.5 ha) and Chennai (1.3 ha). In Mumbai, the amenity space is negligible. "Architects are reduced to a bunch of agents who take packets from clients and hand them over to officers to pass projects, whether these have merit or not," he charged.

Land meant for amenities -- gardens, playgrounds, schools, hospitals, wider roads and open spaces -- was covertly siphoned away for private building projects or turned into slums, according to Prabhu.

Dean D'Cruz, an architect noted for his quaint and often unplastered brick homes that are catching the fancy of the affluent in Goa, voiced concern about lax regulations which are allowing monstrous buildings to come up in Panaji, which earlier housed low-rise structures.