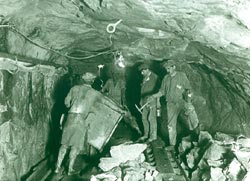 three billion years ago, when there was no life on land and no oxygen in the atmosphere, rivers ran with gold. This is the hypothesis of an international team of researchers, who have recently analysed the world's biggest gold deposits -- South Africa's Witwatersrand 'gold arc', which is the source of more than 40 per cent of all gold mined so far on the Earth.

The researchers, from us-based University of Arizona, Australia-based Commonwealth and Industrial Research Organisation and uk-based University of Edinburgh, have discovered that the gold is around three billion years old -- older than its surrounding conglomerate rock by a quarter of a billion years. Usually, gold comes in non-radioactive form. But gold from Witwatersrand Basin has the rare radioactive element rhenium in it. Over a period of time, this rhenium slowly decays into another rare element, osmium. The researchers took about one three-hundredths of an ounce of gold and carefully measured the quantities of osmium and rhenium within. Their analysis indicates that the gold is 3.03 billion years old, give or take 20 million years. They also determined similar age for crystals of the mineral pyrite found near the gold deposits. Since pyrite does not dissolve in water if too much oxygen is around, the researchers suggested that the atmosphere was largely devoid of oxygen at that time and consequently land was bereft of any life.

The Witwatersrand gold is found in a sedimentary basin. But the age and origin of the gold has been hotly debated for years. One theory argues that the gold was carried into the basin by sedimentary processes. A conflicting theory holds that it was placed by hydrothermal fluids -- the equivalent of hot springs -- from the upper continental crust.

The new results confirm that the Witwatersrand gold deposits are 'placer' deposits -- millions of years ago, ancient rivers carried gold particles, along with sand and silt into the Witerwatersrand basin possibly from granite mountains. Over time and under pressure, the gold-bearing sediments solidified into rock, forming the rich gold-bearing reefs.

According to the researchers, gold first formed in older rocks that were produced when the upwelling mantle formed a major piece of South African continental crust called the Kaapvaal craton. Later, the gold was weathered and reconcentrated in the Witwatersrand paleolake sediments. "It's a pretty definitive find," said Stephen E Kesler, a professor of geological sciences at the University of Michigan, usa. However, proponents of the hydrothermal theory are not yet convinced. "The new data these guys have got is very controversial," said Andrew C Barnicoat, a geoscientist at the University of Leeds in England, the uk. According to him, a close-up look at the gold-bearing rocks tells a different story. Three-quarters of the gold is crystallised within rock cracks, he said, suggesting that the rocks formed first. "The gold sits in corrosion spaces," Barnicoat said. "It sits in fractures. I wonder whether there are alternative ways of interpreting the isotopic data."