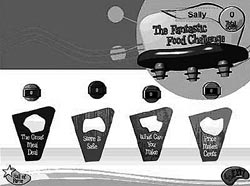 How do you get people interested in learning about nutrition? Play a game. The Michigan State University (msu) in usa is running a project during which people from low-income families play a computer game in which contestants who know more about food groups, recipes, food cost and handling food have a better chance of winning.

'The Fantastic Food Challenge' can be played on standard desktop and portable computers. It includes games like 'great meal deal' in which players must learn about food groups, 'store it safe' during which they rapidly store food in their proper locations and 'price makes cents' during which they must learn the relationship between food cost and number of servings.

"The computer game was developed with the aim that people while playing it become stimulated enough to discover knowledge on their own," says Coleman.

Fantastic Food Challenge is modeled after card and dice games, and tv shows like 'The Price is Right'. Its games are designed to appeal to casual game players, particularly young female adults.

Researchers will study whether the computer game motivates people to learn about nutrition and then transfer what they have learnt to real-world tasks. "If digital gaming proves to be an effective education method for adults, then education could be provided to a much larger segment of people in a cost-effective way," says one of the researchers.