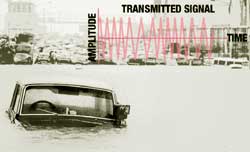 Unlike much of the rest of the city, Mumbai's fm radio stations seem to have emerged from the recent flooding looking significantly better than they had before. Ever the humble stepchild in India's increasingly valuable media race, fm radio has only become more toothless (read, irrelevant) since the government's ban on "hard" news took effect. But as the floods waters raged over Mumbai's streets, many were surprised to note that it was only the city's radio stations -- and private fm stations at that -- that had any immediate relevancy at all.

This is not to say that either television or print journalists sat on their haunches. Television news networks reportedly responded both quickly and overwhelmingly -- Star News alone is said to have launched into the chaos 30 reporters, while ndtv beamed out helicopter footage. Subsequent criticism has arisen that much of this coverage dealt only with what was happening, rather than the more important question of what citizens could do to help themselves or others during the calamity. Even if the content had satisfied this criticism, the situation remained problematic for tv consumption: the entire city was without electricity for days.

Enter the dismissed: not only are Mumbai's fm radio stations being heralded for the immediacy of their non-obligatory response (remember: these are private stations working under a national news ban), but also for broadcasting the only content to prove truly usable. Many stations reduced or suspended their music playlists -- opening up their switchboards to citizen-reporters phoning-in with unofficial but up-to-the-minute information on traffic, flooding and community conditions. Radio staff offered round-the-clock helplines, interviews with relief workers and appeals to those at home to help those still in need. Stations also relayed uplifting accounts of survival, heroism, and neighbourly helpfulness -- stories that buoyed those caught in the middle of the chaos. In other words, Mumbai's fm stations did exactly what was needed under the extreme circumstances.