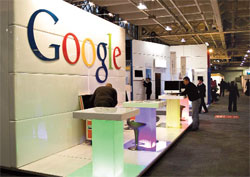 The search engine giant added, if the word “trademark could be inserted to ensure that people knew that Google was a trademarked term, that would be great”. Rather than acquiesce to Google’s request, the council decided to drop “ogooglebar” from consideration. The decision “[marks] our displeasure with Google’s attempts to control the language,” the council’s director Ann Cederberg said. “We have neither the time nor the inclination to pursue the lengthy process that Google is trying to start. Nor will we compromise and change the meaning of ogooglebar,” she said.