Google Maps is tangled in a border dispute between Costa Rica and Nicaragua. 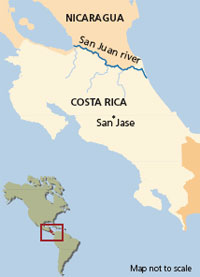 According to the Costa Rican press, misrepresentation of the country’s northeast around the river San Juan by Google Maps encouraged former Nicaraguan guerrilla leader Eden Pastora to conduct a river dredging operation in the disputed territory.

Pastora denies the allegations and insists his understanding of the border between the two Central Asian countries is derived from an 1858 treaty, and is not influenced by Google Maps.

Google’s mappers blame the US state department for the fracas. In a blogpost on November 12, a Google spokesperson said the mistake happened because the data provided by the department identified the disputed area around San Juan as part of Nicaragua.

Google has taken off the map, declining a request from the Nicaraguan government and announced that its maps should not be used as basis for taking military actions.