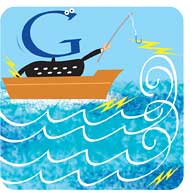 Google may take its battle for global domination to the high seas with the launch of its own computer navy. The company is considering deploying the supercomputers necessary to operate its Internet search engines on barges anchored up to 11km) offshore. The "water-based data centres" would use wave energy to power and cool their computers, reducing Google's costs.

In the patent application seen by the English weekly The Times, Google's representatives wrote: "Computing centres are located on ships, anchored in a water body from which energy from natural motion of the water may be captured, and turned into electricity."

The increasing number of data centres necessary to cope with the massive information flows generated on popular websites has prompted companies to look at radical ideas to reduce their running costs. The supercomputers housed in the data centres, which can be the size of football fields, use massive amounts of electricity to ensure they do not overheat. As a result the Internet is not very green. Data centres consumed 1 per cent of the world's electricity in 2005. By 2020 the carbon footprint of the computers that run the internet will be larger than that of air travel, a recent study by McKinsey, a consultancy firm predicted. In an attempt to address the problem, Microsoft has investigated building a data centre in the cold climes of Siberia, while in Japan the technology firm Sun Microsystems plans to send its computers down an abandoned coal mine, using water from the ground as a coolant. Sun said it could save us $9 million of electricity costs a year.

Google refused to say how soon its barges could set sail. The company said: "We file patent applications on a variety of ideas. Some might mature into real products, some won't."