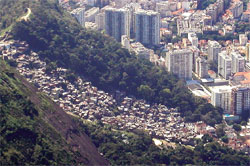 Google has agreed to amend its map of the Brazillian city of Rio de Janeiro after the country’s media and city officials slammed it for giving prominence to favelas or shantytowns.

When viewed in large format, the map pinpoints several of Rio’s more than 600 favelas. It does not label the middleclass neighbourhood of Cosme Velho, where tourists take the cable car up to the famous statue of Christ.

The Rio daily Globo said the map creates a “false impression that the urban area is nothing more than an immense cluster of favelas”. “Anyone who doesn’t know the city would be frightened,” a Rio resident said. A Google spokesperson said “the company had never intended to defame Rio”. It later announced the map would be gradually amended. The favelas would still be marked but only once the user zooms in.