Chattisgarh government in a tight spot due to its poll ploy 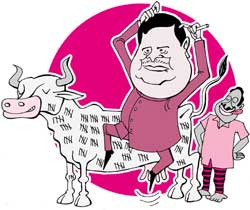 chattisgarh's Bharatiya Janata Party government has become a laughing stock due to its unfulfilled vote-garnering promise of distributing cows among tribals. While the government is finding it difficult to provide the promised cows, the opposition is happy. Veteran tribal leader who also leads the opposition in the state assembly, Mahendra Karma, has levelled a serious charge of "cow scam" on the government.

Way back in 2003, the government had declared it would distribute one cow to each tribal family. But it distributed only two cows during 2004 despite a budget of Rs 25 crore for the project: the budget this year is Rs 30 crore.

A survey conducted by the government after its initial announcement had found that 10,00,000 cows were required to fulfill its promise. But it obviously did not want to take so much trouble. So, it amended its promise: only tribal families below the poverty line would get the bonanza. A fresh survey set the new requirement at 200,000 cows. But the government wanted further relaxation: cows only to tribal families below the poverty line that stayed on the milk route. The new requirement was 100,000 cows. The government announced distribution in Bagbahara, Pakhanjur and Jagdalpur. The National Dairy Development Board (nddb) was asked to provide cows worth Rs 600 each for the purpose. But the distribution was postponed due to the panchayat elections in the state. The government decided to undertake it on January 1, 2005, but the programme had to be postponed thrice subsequently, for January 26, February 12 and February 26. Officials now say the distribution won't start even on February 26. The chief minister had to give away 200 cows but the nddb arranged only 78. Of these, only two met the nddb standards.

Detractors of the move question the very logic of providing cows to tribals. They say there is no tradition of drinking cow milk among tribals. Many of them, instead, eat cow flesh.