Will the Aayog's vision be any different than the top-down approach of its predecessor, the Planning Commission? 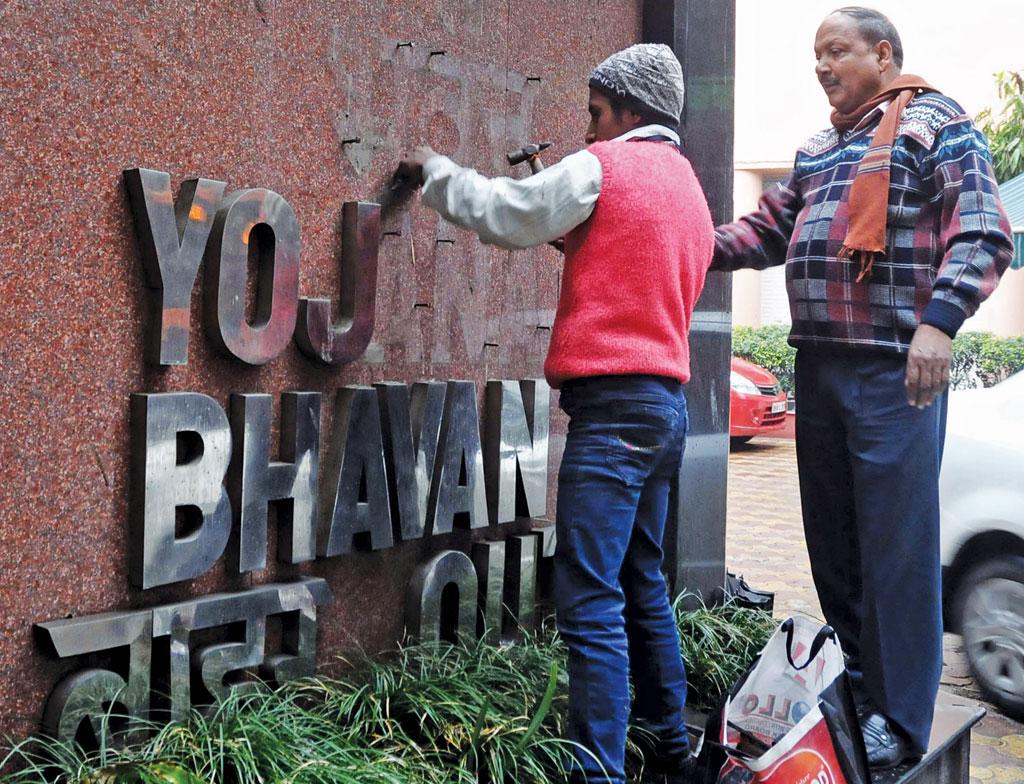 WITH THE end of the 12th Five Year Plan on March 31, India’s 65-year tryst with five-year economic development planning has come to an end. In 2014, when the National Democratic Alliance government scrapped the Planning Commission and replaced it with the National Institute of Transforming India (NITI) Aayog, it announced that the five-year plan, a top-down planning process, would be replaced with a vision document, which will bring states to act together in national interest, and thereby foster cooperative federalism. But on April 1, when officials reach the newly-painted and renamed office building of NITI Aayog in Lutyens’ Delhi, they would be clueless about the task at hand.

“We are neither aware of the timeline of the vision document nor its contents and when it will come into force,” says a NITI Aayog member who does not wish to be named. While some NITI Aayog officials tell Down To Earth that the vision document would provide a three-year strategy, others speculate that it would cover a period of seven or 10 years.

Former Planning Commission members, who agree with the government’s decision of doing away with the institution, are critical of this void in the planning process. “Development plans need to be formulated with long-term vision. But no document available in the public domain offers a sense of that vision,” says B K Chaturvedi, former cabinet secretary, who was instrumental in formulating the Twelfth Five Year Plan.

Besides, experts say several countries, including China, Vietnam and Cambodia, are benefitting from the five-year planned economic development model. So, they say, the government should have restructured and streamlined the five-year plan instead of scrapping it altogether.

Change is must, but how

In 1951, taking cues from their Soviet advisers, Indian leaders introduced the First Five Year Plan. The Planning Commission was charged with the responsibility of making assessment of all resources of the country, augmenting deficient resources, formulating plans for the most effective and balanced utilisation of resources and determining priorities. Since then, five-year plan guidelines have played a crucial role in the country’s development, right from raising people’s living standards to improving literacy rate, food production and health parameters, alleviating poverty and promoting industrialisation. But towards the 1980s, the plans started becoming more technical, driven by bureaucrats and isolated from realities. “Then prime minister Rajiv Gandhi once termed the Planning Commission as a bunch of jokers,” recalls Arun Maira, a management consultant who was part of the Twelfth Five Year Plan.

Both the Planning Commission and five-year plan documents started losing their relevance after 1991 when India became a free market economy, says N C Saxena, who was member secretary of the erstwhile Planning Commission during the Ninth Five Year Plan. Neither the Union government nor the states took them seriously. Ministries also stopped suggesting how to improve the plan document or prepare a realistic document. As a result, their quality deteriorated and preparing plan documents just became a plain ritual, says Saxena.

There had been wide divergence in what was written in plan documents and what was allocated to ministries and how the schemes and programmes were implemented. Over the years, the Planning Commission became a dumping ground for defeated politicians and disinterested bureaucrats. This made the institution dormant, he adds.

During mid-year assessment of the Ninth Five Year Plan, Saxena had written a critical assessment of the plan. “At that time only an international journal Economist picked my assessment and wrote ‘PC description of India’s development programs reads like criminal charge-sheet’,” he recalls.

Change was necessary because the five-year plans were no longer dealing with realities, says Maira. In 2011, former prime minister Manmohan Singh tasked Maira to look into what needs to be changed. “Following our studies, we suggested some changes,” says Maira, who has written a book, An Upstart in Government: Journeys of Change and Learning, which details India’s planning process.

Maira created 26 working groups and consulted as many experts across the realms as possible to make the 12th Five Year Plan more participatory and realistic in target. His suggestions have now been incorporated into the NITI Aayog’s evolution as the new planning body.

But Saxena says nothing seems to have changed except the names. Just like the erstwhile Planning Commission, the new institution lacks clout and authority to guide a scheme to achieve goals. It also does not have power over allocation of funds for ministries as per plan documents or vision documents. No secretaries come for a meeting called by the NITI Aayog. Instead, they send junior secretaries. This is how they used to respond to meetings called by the erstwhile Planning Commission, says Saxena.

Chaturvedi explains how the lack of vision document has already started affecting the development process. Soon after scrapping the Planning Commission in 2014, the government reduced the deadline of several programmes, including the Total Sanitation Mission, from 2022 to 2019, without any plan documents. “How can one know that on what basis the timeline of targets has been reduced? Plan is not a dirty word. It is more firm compared to vision documents,” Chaturvedi adds.

Yoginder K Alagh, a noted economist who was part of the Seventh Five Year Plan, says, “We’ll have to look for a strong alternative to the five-year plan, which the government seems to have forgotten while creating the NITI Aayog.”

This story was published in the April 1-15, 2017 issue of Down To Earth magazine under the headline "Era begins without planning".