Villagers gain employment through the job guarantee scheme, used as a means to revive rural infrastructure like reservoirs, cattle sheds

Thirty-one-year-old Ram Ratan was employed as a ‘saksham’ teacher at a government school in Haryana’s Kurukshetra district till March 18, 2020. Ratan was hopeful about his job and — armed with a Masters in psychology and a diploma in guidance and counselling which he completed in February — pursued the job of an assistant professor.

His plans, however, were dashed when the school closed March 19 because of the nationwide lockdown to curb the spread of the novel coronavirus disease (COVID-19).

Ratan and his younger brother were the only earning members in a household of 13 people. His job as a teacher was an honorary assignment under the Saksham Yuva Yojana that provided employment to educated, unemployed youth in the state government and private enterprises.

Ratan’s income slowed to a halt after the lockdown. This loss of income hit the family hard: His two-year-old daughter had a heart ailment, while his elder brother was under treatment for a mental disorder. 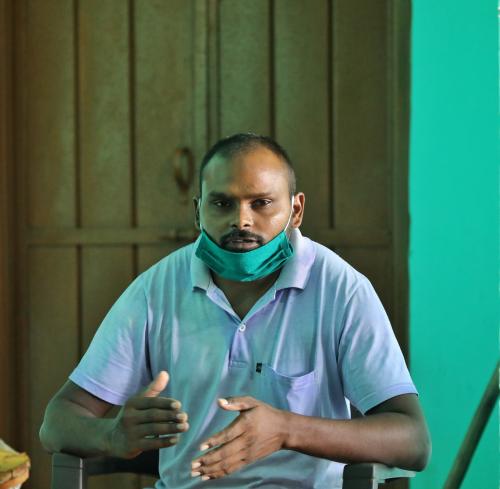 Ram Ratan and his younger brother are the only earning members in a household of 13 people. Photo: Vikas Choudhary

This was when Ratan decided to get a job card and work to construct a johad — a small community-owned traditional water body which harnesses rainwater — in the village.

Ratan said announcements for work undertaken through the Mahatma Gandhi National Rural Employment Guarantee Act had begun at that time. “MGNREGA has been a great help since then,” he said.

A large number of people — teachers, tailors, gardeners and skilled construction workers — lined up post-lockdown to seek work under MGNREGA, which seemed to be the only employment provider.

Satpal, 48, who worked in a tailor shop in Kurukshetra, faced an uncertain future. “It was a tough decision to enrol myself as I have not done much labour-related work, but MGNREGA was the only option at the time,” he said.

“The tailor shop has now opened, but there are hardly any customers. So, there is no work and no money. I am hoping to get more work under MGNREGA after the monsoon,” he added.

Ratan and Satpal are among several others who lost their livelihoods and faced an uncertain future after the lockdown. Work under MGNREGA, thus, came as a boon for them.

Surajbhan, 40, from Dayalpur village, worked as a gardener at the National Institute of Technology, Kurukshetra for the past decade, but lost his job when the lockdown was implemented and the university shut.

“One day, I saw many villagers working at the pond. I asked around, after which both me and my wife got a job card made,” he said. They worked for 25 days and earned Rs 16,000.

MGNREGA, thus, ensured employment for villagers robbed of their livelihoods and helped create or revive productive assets for several villages with the help of the community.

Under MGNREGA, the pond was brought back to life. Another advantage was its proximity to paddy fields where excess water now flows into, instead of being wasted.

Johads in several villages remained abandoned for several years. “In Haryana, there was not enough care for water structures because there used to be plenty of water earlier,” said Manoj Kumar, additional block programme officer (ABPO) of Thanesar block in Kurukshetra.

“This is now a problem because our water table is depleting due to excessive use of groundwater,” he added.

Attention was now being paid to revive old water bodies, according to Kumar.

“Now since the villagers have revived this together, there will be a sense of ownership among them towards the water structure,” said Kumar.

Similarly, in Dayalpur village, a five-acre ‘model pond’ — to be used for irrigation purposes by the villagers — was developed under MGNREGA. Till now, farmers in the village mostly relied on groundwater for irrigating their fields.

The pond, called ‘Bhishma’ had historical significance, but was not maintained till now, with silt deposits in it and water overflowing at other times. The pond was selected to be developed as a model under the Haryana government’s model pond plan to rehabilitate 18 such ponds in the district.

A park will also be developed in a two-acre plot next to it, the work for which will also come under MGNREGA.

“The pond and the park are going to be village assets and will be used by villagers for irrigation purposes. We brought its work under MGNREGA because there was an increasing demand for work in the village,” said Kumar.

In Yamunanagar district, cleaning and maintaining the Hathnikund barrage was brought under MGNREGA for the first time. Many villages under the block were dependent on this barrage for irrigation, with water from the Yamuna also released from here.

In the last four to five years, a lot of silt and waste accumulated in the barrage and in the small canals nearby. This was removed and cleaned under MGNREGA.

“Generally, the irrigation department issues a tender for this work but for the first time it was brought under MGNREGA,” said Gurnam Singh, ABPO of Pratapnagar block in Yamunanagar district.

“We had to bring in new works as the demand was much higher than previous years,” Singh added.

The district saw a 352 per cent jump in demand for work.

Another work scheduled for a second MGNREGA phase in the district was the creation of small ponds for wild animals in a reserve forest area nearby, said Singh. In addition, MGNREGA laid a special emphasis on creating private assets for the villagers.

In Haryana, 784 individual works — most of which were cattle / dairy sheds — were completed. The focus was on farmers from the below poverty line category, said Singh.

Javed Khan, a livestock farmer in Pratapnagar’s Tajewala village and a beneficiary of a cattle shed, said he was now hopeful of an increase in his income.

“I used to keep my cattle in a makeshift structure which became messy during the monsoon because of cow dung and urine. If I keep them in a hygienic and sanitised place, it will be better for milk production,” he said.

There was also a fear of the temporary structure catching fire, said Khan, who cited a similar incident that another villager faced.

A shed cost around Rs 58,000, including labour cost, according to government estimates, with the beneficiary household deployed for any unskilled labour work.

In this block, 200 cattle sheds were sanctioned, of which two were completed till now.

“The rest will be done when work is taken up again after monsoon. The cattle shed plan was there for some time but it finally happened this year,” said Singh. There was also a proposal to take up construction of private farm ponds after the monsoon.