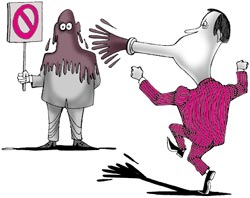 while the world celebrated the coming into force of the Stockholm Convention on Persistent Organic Pollutants (pops) on May 17, 2004, India witnessed a strong protest against it. The Indian Chemical Manufacturers Association (icma), a major stakeholder in the convention, boycotted an important workshop on pops organised on the same day by the Union ministry of environment and forest (moef) and the Confederation of Indian Industry (cii). It also threatened to boycott the moef's nine upcoming meetings on these pollutants. This boycott has placed the Union government is a tight spot as it is constantly harangued by green groups to ratify the convention.

The Stockholm convention aims at phasing out 12 dangerous pesticides and industrial pollutants, commonly known as pops or the dirty dozen. More than 150 countries have signed it and about 60 have ratified it. The treaty will convene its first conference of parties in May 2005. While India has banned most pops, ddt is still used and dioxins and furans are produced as by-products by many industries.

"We have our own reservations to the Stockholm convention. Despite repeated communications, the government has not responded to the issues we raised. It has failed to give us any assurance. I have personally written to the moef, cii and the United Nations Industrial Development Organisation, but have not got any response from them," alleges S Ganesan, co-chairperson of icma's expert committee on international treaties.

The chemicals industry's protest has added to the moef's woes. "While non- governmental organisations (ngos) are pressurising us to immediately ratify the convention, the industry is against it. At the time of signing the treaty in May 2002, we had said India would ratify it only after studying the ground situation," says N H Hosabettu, director, moef, adding: "The Lucknow-based Industrial Toxicology Research Centre (itrc) is carrying out this study, which should be completed by September 2004. Only after studying its report can we take a final decision on ratification."

icma's move could seriously impede moef's plan of action to deal with pops. The ministry is organising ten meetings on these pollutants throughout the country during May and June 2004. The May 17 meeting was the first in the series. The meetings are clubbed under two themes. The first five meetings are to work towards raising awareness about pops among various stakeholders and involving them in the process through discussions. In this category, the Delhi meeting is to be followed by meetings at Baroda, Pune, Bangalore, and Hyderabad. The second set of meetings would focus on conducting discussions on the status of pops in India and strategy formulation.

moef is also being assisted by some other bodies in this. "It is moef's mandate to develop a national implementation plan (nip) for pops," informs Yogendra Chaudhury, counsellor, cii. "It has contracted out this work to itrc, which has further sub-let it to three organisations: cii, Baroda-based Associated Environmental Engineers Pvt Ltd, and Bharuch Enviro Infrastructure Ltd," he adds.
Ganesan alleges that there is no transparent and scientific basis for banning pops and including new elements in the list of these pollutants. Of the present dirty dozen, nine are pesticides. The possible new entries include two pesticides, lindane and endosulfan, and brominated flame retardants, such as polybrominated diphenyl ethers. Representatives of the chemicals industry also point out that the convention will hurt the interests of the South, while industrialised countries would continue using toxic products. Ganesan cites the example of methyl bromide, which had to be phased out by January 1, 2005 under the Montreal Protocol. But the us and 10 other industrialised countries recently managed to get permission for continuing its use for another year (see: 'Disruptive US', Down To Earth, April 30, 2004).

However, green groups argue that the treaty is unique as it incorporates the precautionary principle. It also establishes a scientific process for adding chemicals to the list of pops. They allege that the industry is opposing it as it is concerned only about profits and ratifying the treaty would mean phasing out certain toxic pesticides.