Statue of Unity or Statue of Tribal Injustice?

A night before the unveiling of Sardar Patel's statue, actvists, locals and journalists were detained by the police to prevent them from protesting 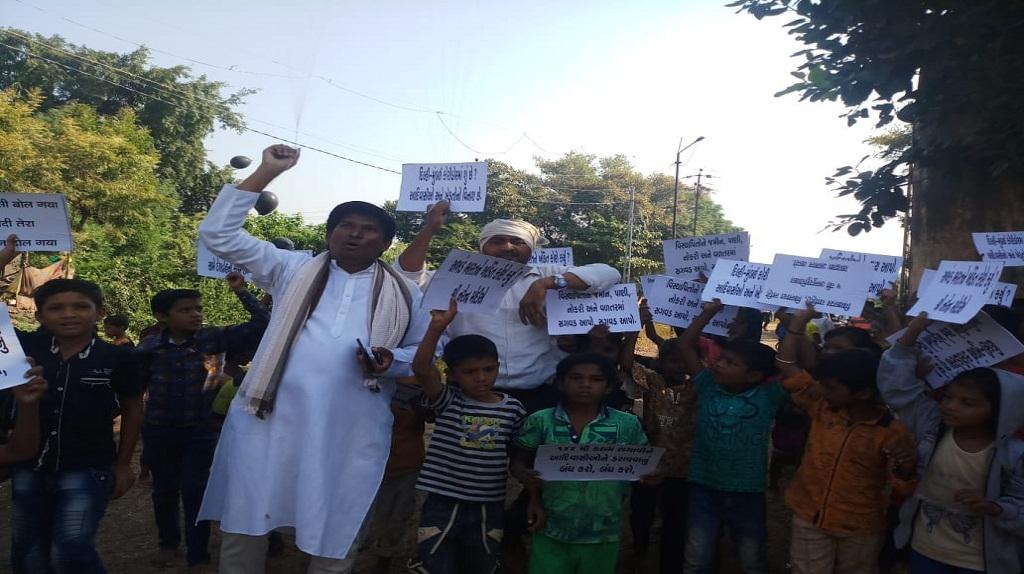 Locals protest land acquisition for road widening, a 53-room hotel and tourist facilities around the structure. Credit: Arranged by author

The simmering anger of thousands of tribals in Gujarat’s eastern belt snowballed into a deafening silence today as Prime Minister Narendra Modi unveiled a statute of Sardar Patel, touted to be the world’s tallest statue.

Scores of villages remained shut and stoves were not lit in home kitchens as a symbol of mourning. Traditionally, no food is cooked when mourning the dead.

As many as 75,000 people from at least 72 villages have been affected by the Statue of Unity located at Sadhu Bet island, which is three km from the Sardar Sarovar Project and within the Garudeshwar weir supporting the dam.

The state machinery, including the top bureaucracy, executive officers, State Reserve Police Force and home guard companies were pressed into service to ensure Modi’s big show-stopper moment ahead of the crucial 2019 electoral battle was picture perfect.

Through Tuesday night, a huge posse of policemen deployed in Narmada district, indiscriminately knocked at the huts and thatched homes and more than 90 social and human rights activists were whisked away without giving any reason.

A local activist Mudita Vidrohi told Down To Earth, “My mother and me were picked up without any reason as though we were hardcore criminals. We were there just to express our solidarity with the Adivasis and there was no public protest programme planned by us or the tribal organisations.” Mudita posted a video on the social media that showed others, including journalists being taken away.

Tribals from across the eastern tribal belt of Gujarat, not just Narmada district, were protesting against the 182-metre statue, two times the height of the Statue of Liberty. There were reports of police making arrests of tribals even in the Dang forests and Banaskantha district in the North to prevent them from staging any demonstrations.

Tribal leader Praful Vasava, who has been at the forefront of the protest ever since the then chief minister Narendra Modi had declared the project in 2013, says, “We have never had any problems with the statue, but we can’t keep quiet about something which hits at our very existence.”

Of the 72 villages affected by the statue, rehabilitation has been left half way in 32. The Kevadia Colony that houses the staff of the Sardar Sarovar Narmada dam project is likely to affect six villages. In seven villages in Garudeshwar block, cash compensation was given but other commitments like land for land or jobs have not been fulfilled.

A local human rights activist, Anand Mazgaonkar, who was detained by the police says, “There are as many as 13 villages with an approximate population of 20,000 which have been directly affected by the land acquisition for the statue project. This also includes land plots taken away for road widening, a 53-room hotel and a host of tourist facilities around the structure.”

He has also said that the first six villages acquired for Sardar Sarovar staff colonies were never recognised as project affected and that they are still fighting this.

Besides, 28 villages on the right bank of the Narmada dam's main canal are not allowed to share a drop of water even in this rain-scarce year. They have also resolved to fight, says Mazgaonkar.