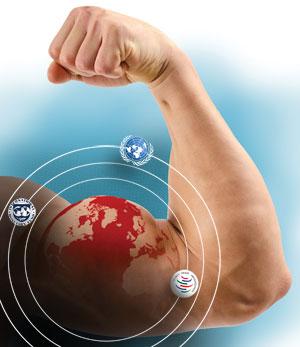 After the slaughter of both the first world war and the second—the two wars having cost humanity at least 60 million, and possibly up to 100 million lives—the people of the world understandably threw up their arms to proclaim, “Never again”. To preserve international peace and security, they recognised the indispensability of a cooperative world order, as opposed to the viciously competitive rival nationalisms that had characterised earlier world orders and led inevitably to the horrors of the two world wars. They also decided to reinforce political institutions of international cooperation with institutions for economic, social and cultural cooperation.

While the political organisation, the League of Nations, set up through the 1919 Treaty of Versailles after the first world war, proved a disastrous failure, the United Nations, established in 1945 after the second world war, was disunited from the start and has failed to prevent over 150 “small wars” in the past seven decades. The subsidiary organisations have fared far better, if somewhat modestly, when contrasted against the high rhetoric with which they were launched. Pride of place among these goes to the International Labour Organization (ILO), set up in 1919, that survived the ignominious disintegration of the League of Nations and has made significant contributions to ensuring a better balance between growth and justice for the working class. Ironically, it is arguable that it is because ILO has successfully promoted the concept of “decent wages” that the proletarian revolution, widely predicted through the early centuries of the rise of capitalism, never really took place.

In the economic sphere, two major institutions that parallel the UN but are not part of the UN system are the International Monetary Fund and the World Bank. Both these institutions have sufficiently stabilised the world economy as to forestall the kind of mutually reinforcing international economic collapse which facilitated the outburst of fascism that brought on both Armageddon and the Holocaust within a quarter century of the “War to end all wars”. Although far more recent, the World Trade Organization, and its earlier version, the General Agreement on Tariffs and Trade, have effectively prevented the “beggar thy neighbour” policies and trade wars that reinforced and made their own contribution to the global economic disruption. It was this global economic disruption that overthrew the democratic and cooperative order that had naively inspired the League of Nations.

This brief sketch of the evolution of international cooperation, or multilateralism, over the 20th century through to contemporary times, would not be complete without reference to the International Atomic Energy Agency (IAEA) based in Vienna and the Chemical Weapons Convention established in The Hague. IAEA has, indeed, contributed to the moderation of nuclear proliferation but hopelessly failed to move the recognised nuclear weapon powers towards the de-legitimisation of their growing arsenals of nuclear weapon and, not at all, of course, towards universal, non-discriminatory, time-bound and verifiable elimination of nuclear weapons. The very existence of Planet Earth, and of humanity on the planet, remain threatened with virtually instant annihilation so long as nuclear weapons continue in existence. The prospects for our survival are, at best, extremely fragile.

As matters now stand, this mixed record of international cooperation is likely to persist into the foreseeable future. Political cooperation for the preservation of international peace and security will continue to be biased heavily in favour of the continued domination, indeed hegemony, of the major powers. The required change of mindset out of the self-defeating “quest for domination” is hardly going to happen, thus rendering all such international cooperation weak, uncertain and volatile. Nevertheless, the UN and its organisations are likely to continue until we blow ourselves up. The tragedy is that the final elimination of humankind cannot be ruled out till the UN follows through on the very first resolution moved by the United States of America and unanimously adopted at the first session of the UN General Assembly in January 1946 that called for negotiations aimed at eliminating the scourge of nuclear weapons. It is such hypocrisy that prevents the emergence of any iron-clad guarantee for the preservation of international peace and security and the assurance of all of us and our children enjoying indefinitely the bounties of nature and human genius.

Meanwhile, the widespread revolt against the consequences of the so-called Washington Consensus on globalisation and liberalisation has released forces of reaction that are widespread in the most prosperous countries of the world. In the early 1990s, Nobel laureate Joseph Stiglitz had drawn attention in his masterpiece, Globalization and its Discontents, princi pally to discontent in the developing world, the discontent is now even more visible in the West. It is yet to be seen whether there is enough wisdom in the world to balance growth with social justice and leaven prosperity with equity. Failure to do so might yet push us into the “dark valley” of the 1930s that climaxed the till then most prosperous era in human history.

Mani Shankar Aiyar is a former diplomat and Union minister, and sitting member of the Rajya Sabha