Trouble in the air 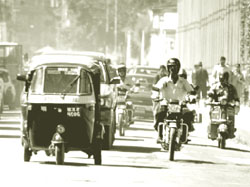 the Nepalese government's decision to ban vehicles older than 20 years has been met with stiff opposition. On February 2, traffic came to a standstill in various parts of Kathmandu after transporters took to the streets. Again on February 9, the National Federation of Transport Entrepreneurs organised a protest rally. The government has decided to ban vehicles older than 20 years and those with two-stroke engines from mid-November 2001. There are more than 100,000 two-stroke powered vehicles in Nepal. Earlier, the government had banned the polluting diesel-run Vikram tempos from Kathmandu valley in September 1999. They have been replaced by battery-operated three-wheelers, also called safa tempos.

The government's decision has drawn flak from transporters. "We will be badly affected if the government enforces this decision," said Sarad Upreti, president of the Federation of Nepalese Transport Entrepreneurs.

Meanwhile, six non-government organisations (ngos) have endorsed the government's decision and want the government to go ahead with its implementation. These include Leaders Nepal, Martin Chautari, The Explore Nepal Group, Pro Public, Clean Energy and the Citizen's Monitoring Group.

Meanwhile, the kingdom is also facing severe shortage of liquified petroleum gas (lpg). Three reasons have been cited for the shortage. Firstly, the government has recently raised the prices of petroleum products, including kerosene that was raised by 100 per cent. As a result, many switched to lpg for cooking purposes. Secondly, lpg-run vehicles as well as industries consume a large amount of the gas. There are over 1,000 vehicles in Nepal that run on lpg -- 700 three-wheelers and 300 micro-buses -- which consume over 500 metric tonnes of lpg each month. Another reason for the shortage is the hoarding of lpg by gas-powered vehicle operators.

All vehicles running on lpg in Kathmandu have been using domestic gas cylinders to power their vehicles. Thus, once filling stations for lpg come up, the shortage is expected to subside. Valley Autogas Suppliers Private Limited has already constructed two such filling stations, though the company has not yet got the approval from the government for dispensing lpg . Once the stations become functional, it might ease the shortage of lpg but all vehicles would have to change their cylinders to meet with the prescribed safety norms, which is that they should have a thickness of 4.5 millimetre.