States prone to floods have failed to implement management schemes, finds a performance audit of CAG 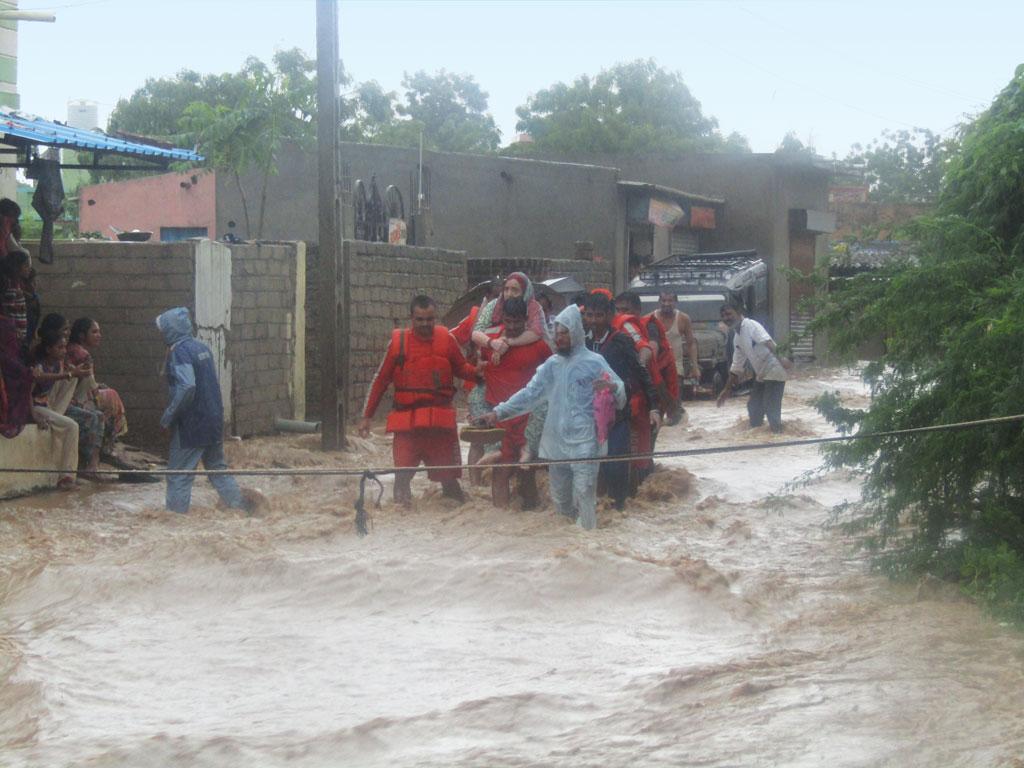 The National Disaster Response Force undertaking evacuation operation in Rajasthan. This is the third consecutive year when the desert state is facing floods (Credit: NDRF)

At least five states in India are currently facing floods. What’s significant is that this is the third consecutive year when the semi-arid and desert states of Gujarat and Rajasthan are in the list.

Floods in India are becoming more unusual in scale, severity and scope, striking beyond the traditionally vulnerable states. Over 700 died in June and July due to floods this year, up from 475 in 2016, and Gujarat and Rajasthan account for nearly half the deaths. A 2015 report by the World Resources Institute, a Washington DC-based research organisation, named India as the country most exposed to risks of river flooding. Under such circumstances, India’s flood management system should have been reinforced. But that has not been the case, says a performance audit of India’s flood management schemes by the Comptroller and Auditor General (CAG) of India.

The audit, tabled in Parliament on July 21, covered flood management schemes in 17 states and Union territories during 2007-2016. It looked into 206 projects under the Flood Management Programme (FMP), which was launched in 2007 to provide Central assistance to the states to manage floods; 38 flood forecasting stations (FFs) that observe water levels in major rivers; 68 large dams and 49 river management works under the River Management Activities and works related to Border Areas (RMABA); and, other schemes. An analysis of the report shows that India’s flood management is lacking in forecasting mechanisms, taking preemptive safety measures and in post-flood management. It also shows that the Central funds given to the states were far less than what was promised, and highlights delays in flood management projects.

A total of 15 states and Union territories of the country did not have a flood forecasting system till August 2016, says the audit. These include flood-prone states like Rajasthan, Himachal Pradesh, Kerala and Manipur. Against a target of installing 219 telemetry stations, 310 base stations and 100 FFs during the 11th Five Year Plan (2007-2012), only 56 telemetry stations were installed and the rest are in “work in progress” mode. While the Indus, Tawi, Neeru, Chenab and Jhelum rivers in Jammu & Kashmir are prone to floods, only one FFS was set up in 2015 on Jhelum, that too, after the devastating floods of September 2014 (see ‘In a tragic state’, 1-15 October 2014).

The audit also found that the Central Water Commission, the country’s premier technical organisation in the field of water resources, “did not depend on telemetry data and relied on manual data even after investing in modernisation of telemetry station network for nearly 20 years. This defeated the purpose of establishment of telemetry equipment for meeting the requirement of real-time data collection, its transmission and flood forecast formulation.”

In another scathing observation, the report points out that 93 per cent of India’s 4,862 dams do not have Emergency Action Plans (EAPs) to help mitigate loss of human lives and property downstream in case a dam is breached (see ‘The deluged’). None of the 200 dams in Rajasthan and 199 dams in Odisha have EAPs, while only one dam each in Gujarat (which has 619 dams) and West Bengal (which has 29) has an EAP.

The Dam Safety Bill, introduced in the Lok Sabha in August 2010 to ensure inspection, maintenance and surveillance of dams, has not been enacted yet. The Bill was supposed to be discussed in the just concluded monsoon session of Parliament. More-over, pre and post-monsoon inspection of dams was not carried out in most of the states and Union territories. For example, in Bihar, an expert committee conducted a safety review of two dams in December 2015 and suggested measures to address the defects and deficiencies. However, none of the measures were implemented. A few months later, 2.5 million people in the state had to bear the brunt of floods. 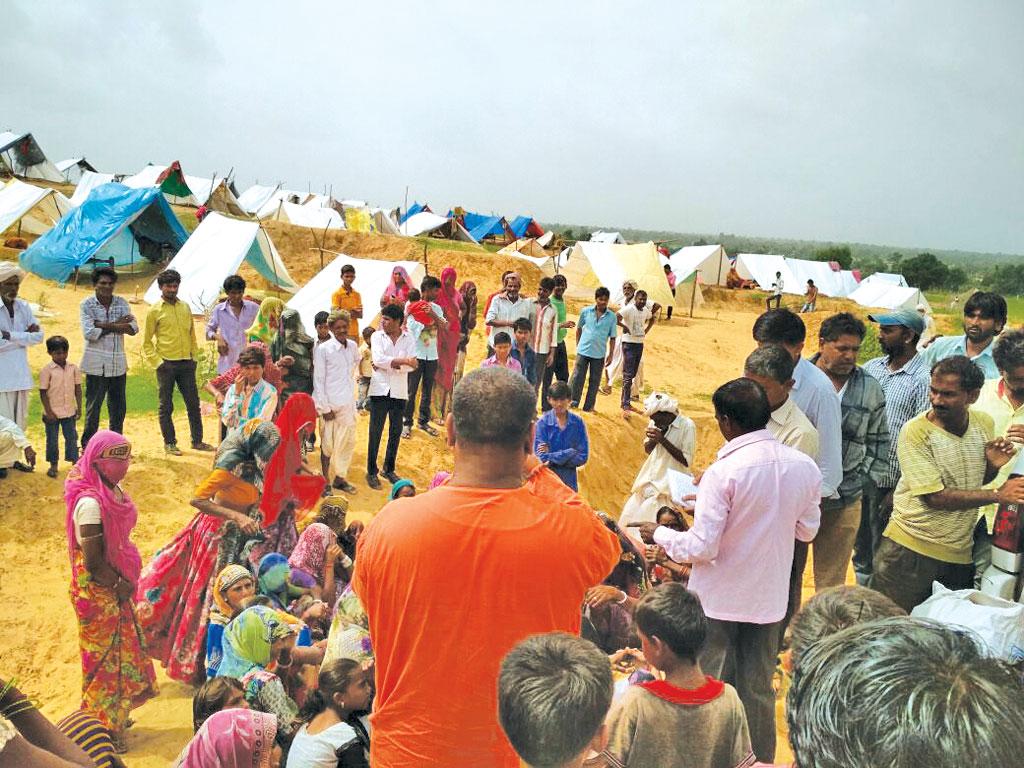 Non-adherence to water policy and disregard for weather forecasts is also an issue hindering effective flood management, especially in Odisha. The audit has criticised the Hirakud Dam authorities in the state for not keeping the dam’s water level in check and failing to prevent flooding in down-stream areas in 2011 and 2014. This is despite the Odisha State Water Policy 2007 categorically stating that flood control is to be given overriding consideration in the reservoir regulation policy even at the cost of sacrificing some irrigation and power benefits in highly flood-prone areas. But this was not the only problem plaguing flood management in Odisha. The audit also noted deficiencies, such as cracks, and lack of warning devices in at least 10 dams.

Moreover, most flood-prone states in the country are yet to demarcate specific areas vulnerable to flooding. In 1981, the Rashtriya Barh Aayogh (RBA) recommended states and Union territories to verify the specific flood-prone zones that it had identified to devise schemes and reduce the annual damage. But till July 2016, of the 17 states and Union territories selected for the audit, only Assam and Uttar Pradesh had verified RBA’s assessment of flood-prone areas, says the audit.

Even before the RBA’s recommendations, CWC, in 1975, had circulated a model bill for floodplain zoning among states to demarcate zones likely to be affected by floods of different magnitudes and specify types of developmental activities permissible there. Barring Manipur, Rajasthan and Uttarakhand, the legislation was not enacted in any state. As a result, enforcement of the measures to mitigate damages were not undertaken in the states that did not enact the legislation. The 2015 Chennai flood is a glaring example where lack of floodplain zoning resulted in the blocking of waterways, leading to inundation in Chennai and its suburbs.

This year, floods ravaged 24 of Assam’s 32 districts, killing over 80 people, affecting more than 1.5 million and destroying about 0.2 million hectare crop area. The state has sought a Rs 2,393-crore assistance from the Centre. However, of the Rs 2,043.19 crore promised to the state during the 11th and 12 Five Year Plans (2007-2017), Assam has received only 40 per cent. There are 16 other states and Union territories that either have inadequate budget or did not get the promised amount.

In fact, shortage of funds for flood management is a recurring theme through-out the audit. Consider this. During 2007-16, the Ministry of Water Resources, River Development & Ganga Rejuvenation approved 517 projects amounting to Rs 12,243 crore for 25 states and Union territories under FMP. However, only 39 per cent of the amount was released. Of the projects approved, only 57 per cent were completed.

It is not just the lack of funds that has affected the implementation of flood control schemes. According to Clause 4.10.1 of the FMP guidelines, the first instalment of Central assistance is to be released to the state immediately on approval of a scheme by the Empowered Committee. But the audit cites 48 projects in four states where there was a two-month to more than one-and-a-half-year delay in releasing the first instalment by the Centre What’s worse, the performance of the states is no better, with the audit finding numerous cases where the money was not utilised. For instance, funds amounting to Rs 171.28 crore for six projects in Bihar, Himachal Pradesh, Jharkhand, Uttar Pradesh and West Bengal were not utilised. More than Rs 36.5 crore, meant for Assam, Himachal Pradesh and Tamil Nadu, were diverted by the implementing agencies for works not approved in the Detailed Project Reports (DPRs).

The audit has also identified procedural lapses in formulation of DPRs. In fact, in Himachal Pradesh—a state which has seen a surge in flash floods in the past few years —three of the five approved projects were taken up without preparing DPRs. This is true for Assam as well. It is a contravention of the FMP guidelines that not only make DPRs mandatory for all projects, but also state that the project reports must contain meteorological data, soil survey, socio-economic benchmarks, among others. In the case of Kerala, even the preliminary project reports (PPRs) were not prepared for the work done under FMP.

“The Performance Audit showed that there were long delays in approval of Detailed Project Reports leading to technical designs becoming irrelevant at the time of actual funding,” states the report.

With rain and extreme weather events becoming more frequent, formulating a sound plan of action and time-bound implementation is the only hope. As long as flood management projects continue to suffer delays, the problem of flooding will only aggravate.

This story was first published in the August 16-31, 2017 issue of Down To Earth magazine.