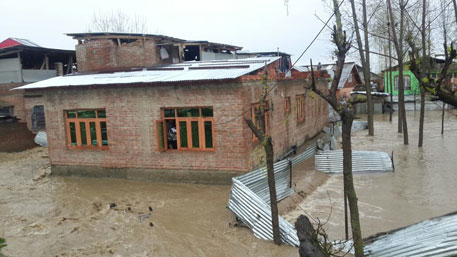 Fear of last year’s extensive floods came back to haunt Kashmiri people after Sunday’s incessant rainfall raised the water level of the Jhelum.

In central Kashmir’s Budgam district, three houses collapsed due to heavy rainfall, the police said. Around 16 members of a family were buried alive when their house collapsed at Laden village in Neelnag area of Chadoora town. According to the police, around 44 structures, including eight residential buildings and 10 cowsheds, have been damaged in the district. Till now, 237 families have been evacuated.

The government has advised people living in low-lying areas in and around the river to move to safer locations.

“We may have to face a low-magnitude flood this week or soon after. Jhelum’s floodplains, including those in Srinagar city, will be inundated. ... the probability of a flood-like situation shall increase with every passing day till September. This is primarily due to high groundwater level all over the Kashmir valley which occurred due to last year’s flood and a wet March,” the head of the department of earth science at the University of Kashmir, Shakil A Romshoo, posted on social media. 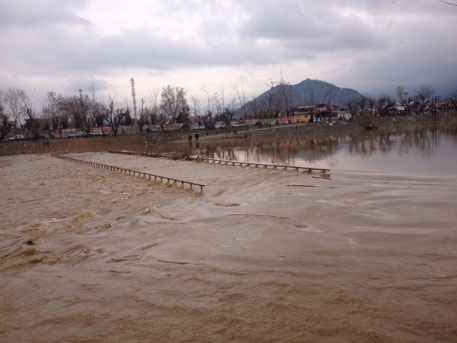 At least100 National Disaster Response Force (NDRF) personnel have been rushed to Srinagar.” Communication lines are intact and we are prepared,” OP Singh, who heads NDRF, said. The chief minister has asked the army to be on standby.

Meanwhile, the MET department has predicted three more days of rainfall. In view of the flood, the government has ordered the closure of schools for two days.

Relief camps have also been set up to help the flood-affected people. Deputy commissioner Farooq Ahmad Lone said marriage halls had been turned into relief camps.

Heavy rainfall has resulted in water logging in many low-lying areas of Srinagar, including Rajbagh and Jawahar Nagar, the most affected areas during last year’s floods.

Meanwhile, the Srinagar-Jammu national highway remained closed for the third consecutive day due to landslides.