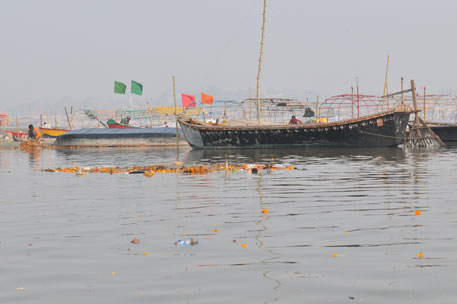 Warning the Centre against its lack of seriousness in cleaning the river Ganga, the Supreme Court on Wednesday said, "You are showing no urgency to protect Ganga".

According to an IANS report published in NDTV.com, the apex court bench, headed by Justice TS Thakur, said, "Are you saving the holy river? You are showing no urgency in this matter. But only in other matters."

Solicitor general Mukul Rohatgi who appeared for the centre sought two weeks adjournment on the issue. The court’s remark has come at a time when there is a huge uproar over collegium system adopted by India for appointment of judges.

Read more: Can we save Ganga?

In his maiden Budget speech in July this year, Finance Minister Arun Jaitley had proposed to set up an Integrated Ganga Conservation Mission, called Namami Gange, and allocated Rs 2,037 crore towards the mission. Jaitley had also said a substantial amount has been spent in the conservation and improvement of the Ganga but “the efforts have not yielded desired results because of the lack of concerted effort by all the stakeholders”.

Pollution in the Ganga remains a tough challenge. According to recent estimates of the Central Pollution Control Board (CPCB), faecal coliform levels in the mainstream of the river—some 2,500 km from Gangotri to Diamond Harbour—remain above the acceptable level in all stretches, other than its upper reaches. Even in the highly oxygenated upper stretches, faecal coliform levels, though within acceptable levels, are increasing in places like Rudraprayag and Devprayag, suggesting inadequate flow for dilution.