More than half of the world's migrants originate in the poorer countries of the South and a large number of them move to the more affluent North; they also contribute to better labour participation rate than the native-born, reveals the latest World Migration Report. It also says that more than half the top 20 migration corridors was accounted for by people migrating within the South. The report talks of need of government policy to recognise contribution of migrants towards a country's development.

The report, titled “The World Migration Report 2013: Migrant well-being and Development”, was published by Geneva-based International Organization for Migration (IOM) last month. Established in 1951, IOM is the world's largest inter-governmental organisation for migration studies and works closely with government and non-government partners. The latest report is the seventh since the first report released in 2000.

The report is based on regional classifications defined by World Bank—“North” represents high-income economies, and “South” represents low- and middle-income economies. The report is based on the Gallup World Poll survey, conducted in more than 150 countries, covering over 25,000 migrants. The report claims it is first assessment of well-being of migrants as opposed to just economic and social development of migrants.

The report tells how economic factors play a vital role. Migration from North to South results in greater economic prowess but these migrants tend to have lower social contacts. On the other hand, those moving from the South to the North struggle to improve their economic well-being, but are better off than they would have been if they had stayed on in their homeland.

The report has been prepared in the backdrop of the second United Nations High-level Dialogue (HLD) on International Migration and Development, which will be held end of 2013 and possibly discuss the positive role of migrants in sustainable development and poverty reduction. The first HLD was held in 2006 and the Global Forum on Migration and Development(GFMD) was formed to discuss migration and its linkages to development. Since then regular meetings have been held with government bodies, international organisations, non-governmental organisations, academia and the private sector to explore the possibilities of integrating migrants in countries' policy to recognise their role.

“The dialogue on International and Migration and Development in 2013 comes at an important time, as the international community considers moving beyond the Millennium Development Goals, and towards the formulation of a new post-2015 development agenda,” says William Lacy Swing, director general of IOM. “Contrary to common belief, migration is not just a South-North phenomenon. In fact, less than half of all migrants worldwide move from developing to developed countries.” says Swing. “There is a need to look at migration and development in a more holistic way,” he adds.

The report states that the international community should start thinking about migration and its contribution to development. The way of thinking has changed significantly over the last decade.

The report underscores the fact that human aspiration is the driving force behind migration. It cites a number of reasons for migration—search of greater opportunities to earn better living, living in an agreeable environment or to join one's family abroad; forced migration like that of refugees escaping persecution; migration because of devastation caused by conflicts or natural disasters and human trafficking.

The findings reconfirm the divide between the rich and poor—the North-South divide. Whether migration improves well-being depends on where the migrants come from and where they go. Migrants moving from North to North appear to have the easiest experience. These migrants have the most positive outcomes in multiple dimensions of well-being, such as life satisfaction, emotional positivity, financial security, personal safety, community attachment and health.

The migrants surveyed were born in 188 countries (51 of which were in the North and 137 in the South) where the poll was conducted. 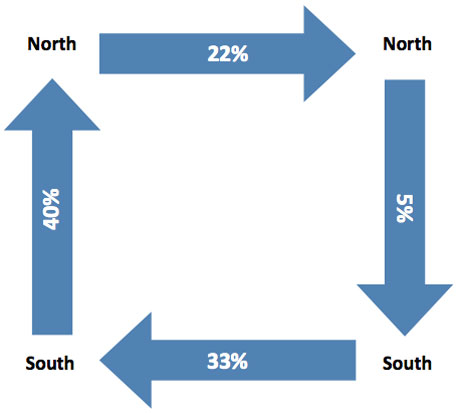 Ratings of actual and future life, by migrants and the native-born (2009–2011)
All migrants are very optimistic about their future. Those migrating within the South are dissatisfied with their present lot but are highly optimistic.  North-South migrants are similarly situated 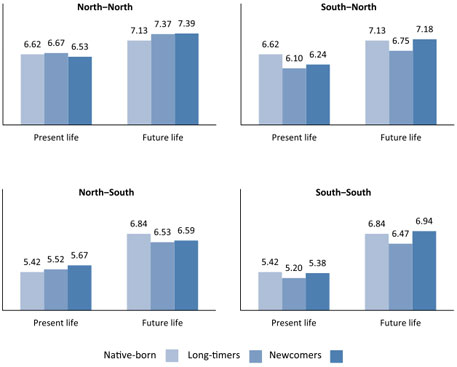 North-South:
Although not in the top 20 global corridors, significant numbers of migrants have been recorded along this pathway, with nationals from the United States moving to Mexico (0.6 million) and, more unexpectedly, to South Africa (0.3 million); Germans to Turkey (0.3 million); and Portugal to Brazil (0.2million)