Governors in the dock

GOVERNORS of states with sizeable tribal population have come in for indictment over not performing their special administrative roles. To ensure partial autonomy in tribal areas, the Constitution entrusts governors with immense powers to supervise the administration and governance in such areas. They can allow or disallow any law or development programme in tribal areas to protect self governance and development needs. They can also make regulations for harmony and effective governance. But governors are hardly doing so, finds the National Commission for Scheduled Tribes.

In a confidential report sent to the President, the Commission has recommended that governors be made more accountable in dispensing their special duties in tribal areas notified under Schedule Five of the Constitution, which protects tribal interests. This comes at a time when the government is allocating large development funds for these areas, many of which are reeling from Maoist insurgency.

“There is a need to evolve a mechanism for the governor … in scheduled areas to monitor and ensure implementation (of constitutional provisions) in letter and spirit. So that governors may play an oversight role in the matter,” states the report sent in June last yearand seen by Down To Earth.

The Commission, a constitutional body, sends an annual report to the President on the state of affairs in tribal areas notified under Schedule Five.

According to sources, the President, who also enjoys special powers in Schedule Five areas, has sent the report to the tribal affairs ministry. It should have been placed in Parliament after a review by the ministry. But the ministry, due to reasons known to it best, did not do so. “We did not table it in Parliament due to complex procedures and nonavailability of a Hindi version of the report,” A K Dubey, joint secretary of the ministry, says. He does not elaborate“complex procedures”.

Since its inception in 2004, the Commission has sent five annual reports to the President. Except for the first one, no report has yet been tabled in Parliament.

The most important responsibility of the governor is to ensure that the special panchayati raj law for tribal areas, known as PESA—Panchayat (Extension to the Scheduled Areas) Act—is implemented effectively and any law that contradicts it is put aside. Through a notification, a governor can annul, restrict or modify state and Centre’s regulations without seeking the opinion of the Council of Ministers headed by the chief minister.

However, according to B D Sharma, the last commissioner for Scheduled Castes and Scheduled Tribes, “All the laws are automatically applicable until the governor does not want to implement or amend as per the need of the Fifth Schedule areas.” As governors fail to perform this duty, general laws have automatically been applicable to tribal areas, often leading to conflicts. 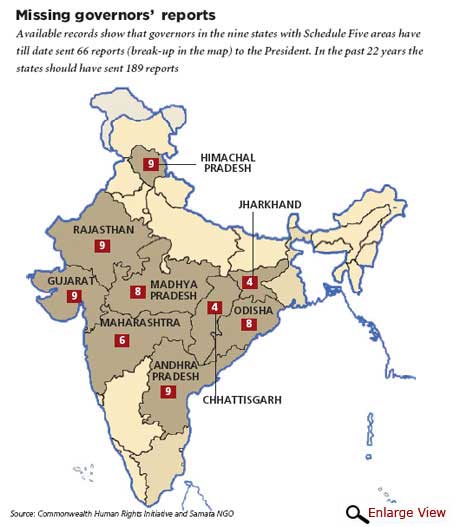 The confidential report has recommended a review of all laws for their adaptation in Scheduled Areas. Every year the governor is supposed to send a TACs conducted meetings till December 2012. Senior journalist B G Verghese, who has written extensively on the issue, says sarcastically that it is mutely accepted by the Government of India that the governor in the Fifth Schedule, meant to be a “governor-in-council”, is acting on the aid and advice of his council. 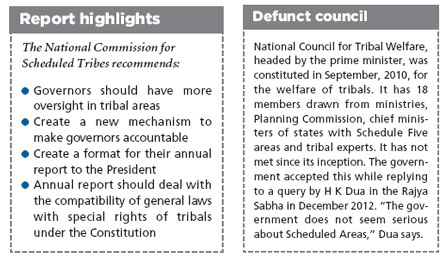 The confidential report has recommended a review of all laws for their adaptation in Scheduled Areas. Every year the governor is supposed to send a report to the President on the state of affairs and his/her interventions.

The commission has suggested that the ministry of tribal affairs should issue a uniform format for preparation and submission of governor’s report. The format should have a provision for review of Union and state laws and their compatibility with the constitutional provisions safeguarding tribal interests. It should also have a specification for listing steps taken to protect the constitutional rights of tribals.

In reviewing laws, governors can consult the Tribes Advisory Councils (TACs) constituted by the states with tribal areas. In the current financial year, four states out of the 11 that have TACs conducted meetings till December
2012. Senior journalist B G Verghese, who has written extensively on the issue, says sarcastically that it is mutely accepted by the Government of India that the governor in the Fifth Schedule, meant to be a “governor-in-council”, is acting on
the aid and advice of his council.

The confidential report has recommended making TACs more accountable. The advisory councils should be reconstituted regularly and meet at least twice a year, says the report.

Out of focus
Governors’ role in Schedule Five areas has been under scrutiny ever since the enactment of PESA. It gained urgency in the recent past with large-scale industrialisation triggering conflicts in several tribal areas.

Governors are not only irregular in sending annual reports to the President (see map), but also evasive on the subjects these reports are meant to address. R R Prasad, director of the National Institute of Rural Development, has analysed such reports. According to him, none of these reports talks about burning issues like displacement, poor governance and insurgency.

“The reports are hardly objective assessments as required by the law. Largely, they read like a laundry list of physical targets and financial allocations under various schemes as reported by the state government’s department,” says Prasad. “It is time a more stringent system is put in place so that the annual report truly reflects the condition of tribes in these areas.”

There is no proper record of the annual reports submitted to the President. Non-profit Commonwealth Human Rights Initiative sought records on governors’ reports between 1990 and 2008 through the right-to-information route. But the tribal affairs ministry furnished reports dating from only 2001, citing the reason that the ministry was created in October 1999.

This is not the first time government’s own wing underscored governors’ negligence in tribal areas. In 2008 and 2011, during governors’ meetings in Delhi, the then president requested them to look into their roles in tribal areas more seriously. In April 2012, the Central government for the first time issued a directive to a governor in respect to his constitutional duty in Scheduled Areas. V Kishore Chandra Deo, Union Minister for Tribal Affairs and Panchayati Raj, asked the governor of Andhra Pradesh to cancel the memorandum of understanding signed for bauxite mining in the state’s Scheduled areas. The governor, however, ignored the directive.

The Commission’s report has officially raised an issue that has been simmering for some time now.