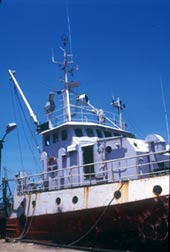 perception, experience and luck -- these are the three elements used by our fisherfolk to ensure a successful catch. Now they have a new aid -- the Global Positioning System (gps). During the recently held Indian National Science Congress, the need to introduce the system across the country was highlighted. However, its viability is a subject of a raging controversy.

gps helps fisherfolk navigate and optimally use satellite data by showing the exact latitude and longitude locations of fishing grounds. The satellite data is obtained with the help of sensors positioned on satellites. These sensors capture data about high sea surface temperature and intense chlorophyll distribution -- two crucial indicators of potential fishing zones. The data is sent to fishing centres and local fisherfolk through telegrams or faxes.

At present, the Indian Remote Sensing satellite is generating data for the Bay of Bengal and Indian Ocean. The Marine Products Export Development Authority (mpeda) -- a nodal agency of the Union ministry of commerce based in Kochi -- had started a pilot project in April 2000 in the Neendakara coast of south Kerala to promote gps.

Following the success of the project, mpeda made it a regular programme, under which it extends financial assistance (30 per cent of the total cost of Rs 50,000) to fisherfolk for installing gps, says J Ramesh of mpeda. Till now, the system has been installed in 800 boats across the country.

Ramesh claims that gps has helped reduce fuel consumption of mechanised boats by about 10 to 15 per cent. But there is a catch. This system can only track down pelagic (surface) fish such as tuna, salmon and sardines, says V Vivekanandan, chief executive officer of the South Indian Federation of Fishermen Society, a Thiruvananthapuram-based non-governmental organisation. "It fails to provide data for fish found in deep seas, like prawns and pomfrets. Moreover, satellite data is available only periodically," he asserts. Optical penetration is also poor and hence chlorophyll distribution cannot be accurately recorded, claims Rajendra Kumar Gupta of the National Remote Sensing Agency, Hyderabad.

In the wake of such arguments, it is not a viable proposition for fisherfolk to spend large amounts of money on gps, says Sebastian Mathew, executive secretary of the Chennai-based International Collective in Support of Fishworkers. " gps is a far fetched idea." Other experts say that mechanised trawlers can misuse gps to do unsustainable fishing. On the other hand, its efficient utilisation can help gauge sea pollution levels. It can also become an effective tool for fish conservation by providing data about endangered species.