India wins the battle over basmati. But the war still continues 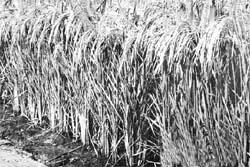 the Indian government has forced Rice Tec Inc to withdraw four of its 20 patents for basmati rice in the us . The withdrawn claims are grain specific -- they pertain to rice grain possessing traits described as 'novel' in the patent that was granted to the company by the us Patent and Trademark Office ( uspto ) on September 2, 1997. There are indications, however, that India would find it difficult to contest the remaining claims that concern 'novel' rice lines and methods for breeding the same.

In April 2000, the government, through the Agriculture and Processed Food Products Export Development Authority ( apeda ), filed a re-examination request with the us Patent and Trademark Office ( upsto ), contesting the novelty aspect of the patented rice grain. The government claimed that the specific traits of the rice grains are found in over 90 per cent of the basmati germplasm existing in India and Pakistan.

On the basis of inputs from the Indian Council Of Agricultural Research ( icar ), apeda furnished extensive documentation and evidence on the various basmati varieties cultivated over centuries in the continent, which the novel grains described in the patent contain. In its response to the re-examination request submitted in April 2000, Rice Tec Inc withdrew the four claims in September.

The 'novel characteristics' in the patented rice grains include, among other things, a starch index of 27-35. R S Paroda, director general of icar , expressed confidence that India would succeed in getting the basmati patent quashed.

"The withdrawal of Rice Tec's claims is a result of the solid case built on evidence collected by Indian agricultural scientists. We have all the information and data to challenge other claims made in support of the patents and we are sure that we will win," he said.

Theoretically, Rice Tec would have been able to block Indian exports of basmati to the us as commercial sale of grains with similar attributes would tantamount to infringement of the patent.

This would, in turn, hit annual Indian basmati exports to the us amounting to 40,000-50,000 tonnes, worth about us $ 30 million. Even if it doesn't block the Indian basmati exports to the us , Rice Tec can still produce these grains in the American continent. In other words, India would not be able to claim exclusive rights in the production and marketing of basmati rice.