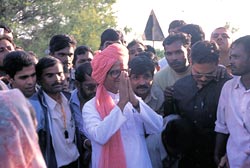 a nearly week-long 'maun vrat' (silent penance) by social activist Anna Hazare recently prompted the Maharashtra government to give a landmark decision devolving more powers to the gram sabha (village assembly). The ordinance issued by the state government in late September, has granted Hazare's main demands -- right to information and more powers to the gram sabha by amending the Gram Panchayat Act.

Welcoming the recent ordinance, Hazare said the amendments were unique from those brought out by other states. He further said that the Maharashtra ordinance has vested more powers to the gram sabha (see box: overview). A look at the present state laws across the country reveals that wide powers of suspension and dismissal have been vested with the bureaucracy. This is a disadvantage for Panchayati raj institutions (pris) as it weakens their rights as elected representative bodies. The Maharashtra ordinance, on the other hand, gives the gram sabha power to dismiss the village panchayat (village council). This, according to Hazare, is similar to the power of the Lok Sabha to dismiss the Prime Minister and the cabinet of ministers.

The ordinance has also outlined stringent disciplinary regulations for defaulting government, semi-government and panchayat employees. "An information officer has been deputed in every department to give correct information within 15 days. A delay will lead to a fine of Rs 250 per day and false information will incur a penalty of Rs 2,500," Hazare told Down To Earth .

However, state chief minister Vilasrao Deshmukh has ruled out any confrontation between the gram sabha and the panchayat following the amendment to the panchayat A ct. He said that the panchayat will continue to wield the executive powers and that more powers to gram sabha would improve transparency in the administration.