Under the ocean floor lies an untapped source of energy 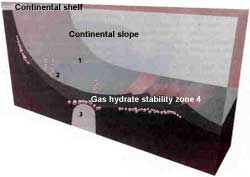 explorations beneath the seabed reveal extensive deposits of gas hydrates -- combinations of water and natural gas (usually methane) -- that are formed at high pressures and low temperatures. Keith Kvenvolden of the us Geological Survey in Menlo Park, California, usa , says there are nearly 10 trillion tonnes of carbon tied up in these deposits, which may be twice that of all the Earth's coal, oil and gas reserves put together (Natural History , Vol 106, No 4).

While exploration companies want to know how these hydrates (in which methane is a predominant gas) might be exploited for energy purpose, geologists are trying to explore the role hydrates play in the Earth's ecosystem.

Could a rise in sea temperatures release methane -- a known "greenhouse gas"--into the atmosphere and accelerate global warming? Researchers say that hydrates contain 3,000 times more methane than that of air, which could contribute to global warming. If the methane were released into the atmosphere, it would pose serious threats to the environment. They are also investigating whether the release of the gas cause shifts in the sea floor.

In 1976, scientists at the coast of Guatemala found a core of gritty mud in the deep-sea floor. The mud had several softball-size nodes of a light and ice-like material. The nodes popped, hissed, and snapped like frying omelettes, releasing gas and throwing off droplets of liquid. Within minutes the only thing left was a puddle of water.

These chemical compounds were gas hydrates that possibly cause instability inside the sea floor and even significantly contribute to global warming. Though the crystalline gas has been speculated for long by scientists and even produced in the laboratory, it has recently been discovered in nature.

When natural gas and water meet in sediments in the presence of high pressure and low temperature, they join together in a compact form. It is extremely difficult to retrieve a chunk of gas hydrates. Whenever, they are brought up from the depth towards warmth and low pressure, unlike diamonds or oil, hydrates quickly decompose into their two components.

Researchers have found nearly 50 areas where reservoir of gas hydrates may exist. According to estimates, nearly 20 quadrillion cu m of methane are locked up in hydrates that is sufficient to blanket the Earth's surface with 40 m thick gas. These figures are based on merely a few dozen recovered hydrate samples, seismic profiles of the sea floor, chemical analyses of drill cores, and extrapolations about where conditions exist for the formation of hydrates.

Most of the gas for hydrates are formed when anaerobic bacteria break down organic matters under the sea floor, producing methane and an array of gaseous by-products, including carbon dioxide, hydrogen sulphide, and small amounts of ethane and propane. However, the amount of methane in hydrates is more than any other gas.

These gases are dissolved in water present in the sediment. Whenever, there is a right pressure-temperature combination, hydrates are formed. In theory, most ocean bottoms provide stability zones, but in practice, hydrates seem confined to the edges of Continents, where nutrient-rich waters send a rain of organic detritus into the mud for bacteria to turn into methane. Though gas hydrates can be found at the sea floor, their usual range is 95 to 1100 m beneath it. However, they can also occur at lesser depths if there are colder temperatures.