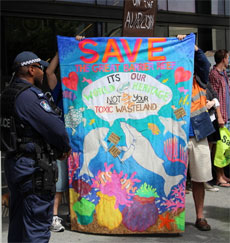 It’s the Great Barrier Reef that decided the winner in the election of Queensland, a coal-rich state of Australia.

The state saw a voter backlash against the ruling Liberal National Party, which has been criticised for rapidly industrialising the coastline of the Great Barrier Reef, a World Heritage Site. Even as part of his election campaign, Queensland Premier Campbell Newman promised to fund a number of coal mines in the Galilee Basin and promised to exempt mine operators from paying royalties to the government. Export of coal is one of the main reasons for the proposed expansion of the Abbot Point port in the Reef, which would release plumes of soil over the reef, increase shipping traffic and damage the fragile coral system.

“We were disappointed in the policies of the previous government," Nick Heath, Great Barrier Reef programme manager at WWF-Australia, told NewScientist. “If those policies had continued, the reef's spiral of decline would be accelerated."

On the other hand, the winning Labor party had run its campaign with the commitment to reverse the declining condition of the Reef. It also pledged to spend $100 million over five years to reduce damage to the Reef and to introduce a policy that would remove subsidies for coal mines in the Galilee Basin. This has led some to speculate that mining would not go ahead, which could also put a stop to port expansion. Leaders of the party also said that, if elected, they would aim to reduce nutrient run-off from some major agricultural regions by 80 per cent in a decade and spend AU $100 million to improve water quality. Nutrient run-off from agriculture boosts populations of crown-of-thorns starfish, which destroy the coral.  Reefs cannot grow or recover in polluted water.

Given the deteriorating condition of the reef, UNESCO’s World Heritage Committee is mulling the option of putting the Great Barrier Reef on its "in danger" list. Ahead of a decision in June, environmental groups have filed lawsuits against the coal projects and are stepping up their campaigns. If the committee deems the reef to be in trouble, there could be restrictions on shipping in the area around the reef.

While the Federal Environment Minister Greg Hunt is suggesting that Australia has done enough to secure the Reef from “in danger” listing, the election results show that the Queensland community does not agree, said Felicity Wishart, Great Barrier Reef campaign director of Australian Marine Conservation Society (AMCS), in a media release issued by Fight for the reef.

“Australians have a more sophisticated notion of what will bring jobs and investment to our shores, beyond relying on being in the ‘coal business’ in a changing global market,” she added. “They recognise that a healthy economy relies on a healthy environment and rapid industrialisation threatens AU $6 billion tourism industry and 60,000 jobs that rely on the Reef.”