Fund members attempt to address concerns raised over its operationalisation 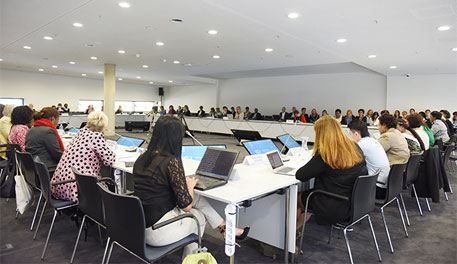 Green Climate Fund (GCF) has been one of the most talked about topics in this year’s climate change conference at Bonn. Apart from multiple side events, the GCF secretariat organised sessions to provide clarifications over many questions raised regarding the fund itself and its operationalisation.

GCF was created with the objective of making a substantial contribution to global efforts to combat climate change and of achieving the goal set out by United Nations Framework Convention on Climate Change (UNFCCC). The fund was formally established during COP 16 in Cancun in 2010. The fund has set a goal of raising US $100 billion per year by 2020.

What separates GCF from other environmental funding institutions is that it has the mandate to invest in projects or countries that focus on transformation. Brandon Wu from ActionAid, who is the developed country active observer on GCF, said, “GCF is looking beyond the business-as-usual investments, and wants to promote a transformative paradigm shift in climate action and GREEAT (Global Renewable Energy and Energy Access Transformation) perfectly suits its criteria.”

GCF is the only fund which includes gender co-benefits as its investment core criterion. One of the participants from Malawi said, “Taking gender seriously is truly transformational for a fund since women can act as ‘agents of change’ to facilitate the transformation.”

The fund also emphasises that all projects and supported plans would be country-driven. This essentially translates to funding proposals in the context of national strategies and plans. “The fund intends to support country-owned or country-guided proposals that would reflect nations’ needs and priorities. This feeds into the support for capacity building,” said Henrik Harboe (Norway), one of the co-chairs of the GCF board.

The board is in a hurry to get the fund operationalised. Before Paris, the fund needs to approve a project or proposal to showcase that the fund is ready for business. However, the South African member of the board, Zaheer Fakir, explained, “We should focus on not repeating the mistakes of Climate Investment Fund. In a haste to fund a project, we should not compromise on quality.”

Before the projects get funding, GCF should help the national designated authority with their readiness and capacity building. There needs to be clarity on long-term predictability of the fund. Funding is available for three years and would not be able to support infrastructural investments that developing countries are looking to finance with this fund.

“All the countries need to realise that investing in GCF is investing in future of the world,” explained Swedish Climate Ambassador Anna Lindstedt. Sweden has committed the largest amount to GCF—about $ 580 million.

While a lot of hope has been pinned on this institution, there are also a lot of concerns about the future of this fund.