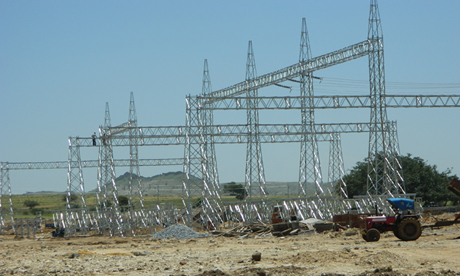 For two decades people from eight villages in Kalpavalli region in Andhra Pradesh's Anantapur district laboured hard to turn a vast expanse of wasteland into a forest. But the effort seems to have gone waste as the green cover is being ruthlessly destroyed to set up wind farms. Enercon Wind Farms (Madhya Pradesh) Pvt Ltd, a group company of Enercon (India) Ltd, a subsidiary of the German company Enercon GmbH, is setting up a 20 MW wind energy project in the area.

Over 20 years ago, Kalpavalli region used to resemble a desert. Hilly terrains, dried streams and tanks and hard surface bereft of top soil marked the landscape. Then came the turnaround. A voluntary organisation and village residents brought to life a thriving wilderness on 2,833 hectares (ha) of land in Kalpavalli, marked as revenue wasteland. At present Kalpavalli has 264 floral species and 105 fauna species. Wild boars, black bucks, foxes and porcupines can be found in the forests. Kalpavalli also provides livelihood to about 400 families (see 'People earn a living from forests').

Kalpavalli falls within Chennekkothappalli, Roddam and Ramgiri mandals of Anantapur, the second-most drought-affected district in the country (Jaisalmer in Rajasthan tops the list of such districts). The eco-restoration programme of this wasteland was started in 1992 as a common property development programme of Timbaktu Collective, a voluntary organisation based in the remote Chennekkothappalli (C K Palli) village, about 20 km from Kalpavalli. The villagers jointly protected the regenerated forests, and in 2008 they registered the Kalapavalli Mutually Aided Tree Growers’ Society with a membership of 1,969.  The efforts were headed by Bablu Ganguly and Mary Vattamattam, a couple working on developing alternative models of sustainable development since 1990 (see 'Agro-forest nurtured for 20 years).

The face of Kalpavalli has completely changed in the past one year after Enercon's entry. The company has permission to install 48 windmills, and the state government has allotted 28 hectares (ha) of land at a cost Rs 25,000 an acre (0.4 ha). Apart from the allotted land, the company has used 79.3 ha of land for road construction.

The company got permission from the district administration to set up the windmills after the Non-conventional Energy Development Corporation of Andhra Pradesh (NEDCAP) sanctioned the project in 2004. According to the company wind monitoring studies have been undertaken by the NEDCAP, and Ministry of Non-conventional Energy sources notified the location "as a proven windy site to encourage investment in the private sector". 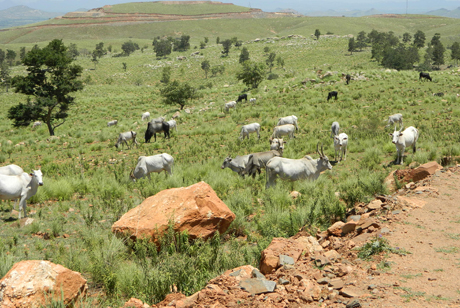 The result has been devastating. Almost all the hillocks in Kalpavalli are bearing the brunt of wind energy production. Vegetation cover has been removed and hilltops are being cut for windmill installation. Deep cuts of about 3 to 4 metre have been made on the slopes to develop roads, but without any retaining walls which may lead to massive soil erosion. The company has so far developed 40 km of road, ranging 10m to 50m in width.  The deep cuts have heavily damaged pasture routes, making it impossible for cattle to climb up the hills.

“We have not given permission to the company for construction of roads,” says Anitha Ramachandran, joint collector of Anantapur district who is in-charge of  land allotment in the district. Despite being asked to submit a request for permission, the company has not done it so far, she says.

Enercon started its installation works after entering an agreement with the Kalpavalli Mutually Aided Tree Growers Society.  The company had agreed to pay Rs 20 lakh and has paid only Rs 12 lakh so far as compensation to the society. As per rule, when forestland is diverted for other purposes, Rs 15 lakh should be paid for every 0.4 ha, points out the state biodiversity board chairperson, R Hampaiah. 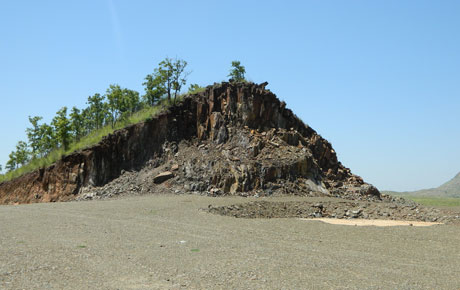 “It’s true that this was revenue wasteland. But it has been regenerated and has a forest which is common property,” he says.

The company has bought 1.6 ha for the village community for building a school. “Apart from this, the company has paid off villagers and local politicians, causing a deep divide and mutual distrust in the community,” alleges Gopal. There was strong resistance among people initially, but now everybody keeps quiet because of the money involved, he says. A few thousand rupees is a huge amount for the marginalised farmers who are in acute distress. Enercon declined to comment on the adverse impact of its project.

While the company is moving ahead with its project, the society maintains that it has been grossly misinformed before signing the agreement. “They (Enercon) said they would use only the existing paths and would take only a little space for installing the windmills,” says Roddam Pothenna, director of Kalpavalli Society and a watchman of the windmill company. “If we had known this much damage would happen, we would not have signed the agreement.” The company pays him Rs 3,000 as salary.

Many villagers like B Ramachandra of Shapuram village, who is a member of the society and also working as a watchman of the company, says it’s really painful to watch the forest which people painstakingly regenerated and protected getting destroyed. “The company has cut a large-number of trees,” he says. Mushtikovila tank has already got silted, say villagers. They are scared to resist.“Windmill people threaten us and tell us if we go near the work site, they would call the police,” says B Nagamani of Shapuram. 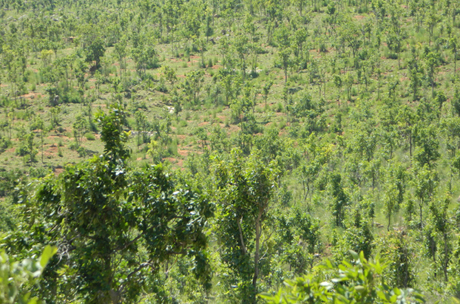 Apart from damaging the grasslands, catchment area of streams and vegetation, the windmills may cause water conflicts in the region.  For base construction of one windmill, one tanker (5,000 litres) of water is needed, and for base curing about one tanker everyday for 25 days. Enercon is taking water from the village wells by paying just Rs 80 a tanker.

While Enercon is setting up windmills within Kalpavalli, two other companies, Samiran Jaipur Wind Farms, an associated company of Suzlon Energy Limited, and Helios Infratech have started their on project outside Kalpavalli. Together, they will set up 168 windmills.

As the biodiversity board chairperson Hampiah points out, if the villagers are genuinely concerned about their common land getting degraded once again, they can form biodiversity management committees and give submission to the board against the destruction in Kalpavalli. Or they can move court.

The large-scale destruction has dismayed Mary and Bablu who started the eco-regeneration programme.  They are critical of the district administration's role which has been implementing water and soil conservation efforts in the water-starved district under NREGA and at the same time allowing the model project to be destroyed in the name of non-conventional energy. “There’s absolutely no perspective or coordination between different wings of the government. The terms and conditions of the land allotment says the government will take back the land if it feels land is needed for any other important purpose or for mining activities,” says Ganguly.