Grown only in a few developed nations till now, the nutrient-rich spirulina algae comes to India 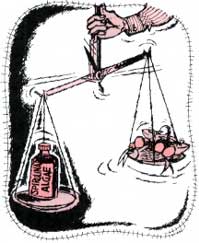 ONE good place to look for better and cheaper medicines has always been our planet's biological treasure house. It has furnished numerous inexpensive alternatives to many expensive medicines and chemicals. And scientists are rediscovering this amazing treasure house, coming up with new applications for plant and animal derivatives. Chicken feather, for instance, has proved to be an excellent cleaning agent for oil spills. Similarly, algae naturally-occurring aquatic growths have proved their usefulness through a stunning flexibility of applications.

So far, scientists have considered alagal growths for curbing global warming, whereby algae grown on the surface of concrete balls immersed in the oceans will absorb significant amounts of carbon dioxide and various other green-house gases that are major contributors to global warming.

Recently, scientists also found that one particular type of algae, the spirulina algae, is a virtual storehouse of nutrients and contains amazing quantities of numerous vitamins and other chemicals required by the human body. However, till a few years back, only a handful of nations the financially well off and research facility-rich developed countries possessed enough know-how to produce this nutrient-rich algae on a commercially feasible scale. But now, thanks to easy availability of modern technology, spirulina algae can be grown in India, that to on a commercially-successful scale.

According to the spirulina enthusiasts, the algae has a number of applications. Apart from its medicinal qualities, spirulina can be used to supplement the daily diet and can also in the cosmetics industry where some of the vitamins and chemicals it contains can prove to be of enormous value. An amazing flexibility of application is what makes this particular type of algae a favourite with most researchers. Well, finally the magic algae has entered India, where a Chennai-based agro-chemical company and the New Delhi-based National Research Development Corporation (NRDC) have combined forces to produce and market it.

The person who has masterminded the whole project is C V Seshadri, a researcher at the AMM Murugappa Chettiar Research Centre in Chennai, India. The product, called "Multinal" is being produced by New Ambadi Estates Private Limited (NAEP), Chennai, with the support from the NRDC. Today, the company produces nearly 100 tonnes of spirulina every year. Multinal is currently being marketed in South India and New Delhi, the national capital.

Spirulina a microscopic plant is a formation of algae growing naturally in fresh water. It uses photosynthesis like any other green plant for its growth and contains up to 70 per cent protein, eight per cent lipids and 16 per cent carbohydrates apart from several other constituents like vitamins and minerals.

For manufacturing spirulina commercially, the company keeps specially identified culture of spirulina in aseptic conditions in its laboratories to manufacture the algae commercially. By serial transformation they are cultured in large vessels under artificial illumination until the algae is ready to be transferred to an outdoor culture. The algae is grown in open, shallow ponds in a nutrient medium helped by regular mechanical agitation to increase photosynthetic yield.

After attaining desirable levels of concentration, part of the bio-mass is filtered, washed and dried. The nutrient-rich filtrate is then recycled back to the pond. Regular make-up of water level, good agitation and nutrient supplementation keep the algae growing for several months. The high-alkalinity requirement for the growth of spirulina prevents any other algae or organism from growing in the same medium.

Spirulina protein has an excellent aminogram comparable to egg protein. Many cereals lacking in amino acids like tryptophan and lysine are complemented by spiruline protein. It is also an excellent vitamin complex containing beta-carotene (Provitamin A), ul, B6, Bl2, c, E and the H (biotin) vitamins. The algae also contains polyunsaturated fatty acids and has very low cholesterol. The plant produces many essential chemicals that help combat diseases.

Scientists have already found that spirulina has a blend of nutrients that no single plant source can provide. The World Health Organisation has found spirulina to be an excellent food for human consumption and it has the approval of the Food and Drugs Administration, USA, for being sold as a natural food.

Spirulina has been easily incorporated in medical formulations owing to its good natural composition. NRDC officials say that the algae is free from side-effects and has high amounts of poly-unsaturated fatty acids and is extremely effective in lowering cholesterol levels in serurn and liver. The presence of vitamins in spirulina, particularly antioxidants like beta-carotene, vitamins c and E, helps protect the body against free radicals formed due to exposure to toxic chemicals, drugs and poor diets. Free radicals can also lead to such severe illness as cancer and can cause faster ageing. The Taiwanese, the leading technologists in fish culture, have identified spirulina as the best suited feed for prawn and shrimp larvae. Spirulina-based feed reduces larval mortality and gives a good growth rate. Breeders of ornamental fish use spirulina for better colouring.

In poultry, spirulina-based poultry feed eliminates the need for adding vitamins and minerals altogether. Spirulina in poultry feed has shown an improved growth rate in both broilers and layers and there is improved shell thickness. The colour of the yolk is a deep yellow due to the presence of beta-keratene in spirulina which is preferred by consumers. It is also ideal for manufacturing face creams for its high protein content, a range of natural pigments and vitamins are all essential for maintaining a healthy skin and can prove particularly significant to the cosmetics industry.