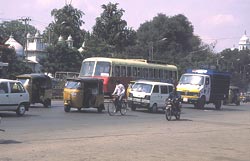 under pressure from the public, the Andhra Pradesh (ap) government has decided not to impose the much-eulogised green levy on 15-year-old polluting vehicles. The Andhra Pradesh Pollution Control Board had proposed this as part of its action plan to control vehicular pollution in the twin cities of Hyderabad and Secunderabad.

According to deputy transport commissioner, P Srinivas "public uproar has forced the government to shelve the plan" resulting in a dismal end to the first ever proposed green tax of its kind in the country. As an alternative, the government is now contemplating checking tailpipe emissions of vehicles with mobile computerised checking centres.

In June 2001 the Hyderabad-based research organisation, Administrative Staff College of India (asci) had estimated that about three lakh vehicles ( 27 per cent of the total vehicle population) in Hyderabad had were over 15 years old. These, vehicles, they pointed out were contributing to 60 per cent of total emissions daily and had suggested imposition of a tax on such vehicles. Following this, the state pollution control board had devised an action plan to impose the emission tax.