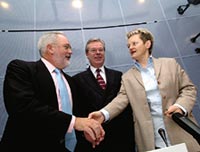 Europe may end its five-year moratorium on new biotech products, with the eu granting approval to the imports of genetically modified (gm) sweetcorn. eu health and consumer protection commissioner David Byrne hoped the ban on gm food imports would be lifted by early April. Byrne said the sweetcorn would be sold in tins for consumption, not for cultivation. This would allow consumers to choose between gm and non-gm products on supermarket shelves, ensuring food safety.But in a sign that the issue of transgenic products remains mired in controversy, member-countries were divided on allowing imports of bt-11 -- sweetcorn made by Swiss seeds company Syngenta. Also, Belgium banned chemical giant Bayer from cultivating gm rapeseed.