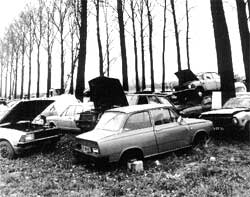 in the wake of growing environmental concern, vehicle manufacturers are now designing products that can be dismantled into reusable pieces. Auto-makers have already made efforts to design cars that could be easily stripped down. A joint-venture company of three big auto-makers -- Chrysler, General Motors and Ford -- the Vehicle Recycling Development Center, Highland Park, Michigan, usa, has launched a Design For Disassembly (dfd) programme. The aim of the company is to close the production loop and build a product with a long-term view of how its components could be recycled and reused, or dispose of safely at the end of the product's life (Span , November/December 1997).

Europe is soon expected to compel manufacturers of products like automobiles and electronic gadgets to back used products. According to the us -based National Academy of Sciences, nearly 94 per cent of resources that are extracted from the earth land up in waste dumps. The principle for dfd is the use of fewer parts and materials, concurrent engineering and quality control. Concurrent engineering brings different specialists into a design team from the beginning.

bmw estimates that by the end of this century, nearly 20 million cars in Europe could be reused. The us is said to be the most efficient in auto-recycling and reuse, that is, about 75 per cent by weight for every American car. The parts of old cars include engines, generators, alternators and other components that can be refurbished and resold. However, it is still difficult to dispose of tyres, glass and plastics.

D Navin Chandra at the Carnegie-Mellon University, California, usa , says that by the year 2005, most computers will become obsolete almost as soon as they are purchased. These would end up in landfills. This means manufacturers should be able to recycle computers as fast as they make them.

The us has already enforced a law concerning toxic wastes. It holds computer and other manufacturers directly responsible if old machines land up on the scrap heap.

A demonstration project known as "green product realisation" was initiated by Air Tours and Travel (at & t), a us -based telecommunications company, in the early 1990s. Other major players have now joined the fray. Recycled products seem to work as well as new ones. This holds true particularly for digital electronics. A memory chip or a microprocessor performs with same efficiency since the only moving parts is the electrons, provided high voltage or temperature has not damaged it, researchers say.