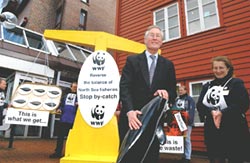 The row over genetically modified (gm) food has taken on strong political overtones in the uk. As part of a controversial cabinet reshuffle, British Prime Minister Tony Blair has asked environment minister Michael Meacher to step down. Meacher, who had held this post since 1997, was an outspoken critic of the Blair government's policy to propagate commercial production of gm crops. He had promised a cautious approach until the science was clearer. "There have, in fact, been no trials on the impact of gm food on human health at all. This is the reason why we need to be cautious," Meacher had averred.

"It now appears that there is hardly anyone left in the government to support the public and organic farmers in opposing the commercialisation of gm crops," lamented Patrick Holden, director, Soil Association. The uk will decide later this year, after field trials, whether to grow gm crops commercially.