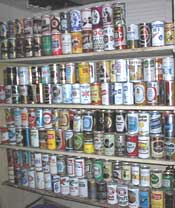 In a bid to block its implementation, an association of German brewers has moved court against the government's directive introducing deposits on non-returnable beer and soft drink cans and bottles. The body, which includes 55 brewers who handle about two-thirds of the country's brewing production, recently filed a suit against Germany's 16 federal states.

"We have swung into action by initiating the legal process," reveals Michael Scherer, the chief of the brands and packaging association for German brewers. "Our contention is that the move is neither ecologically viable nor economically sensible. Another factor that has made us speak up for the drinks industry is that only this sector is being targeted," he adds.

The German cabinet has given a green light to the measure that stipulates deposits of 25 cents ($0.22) for smaller disposable containers and $0.44 for cans and bottles above 1.5 litres with effect from 2003. The money is returnable subject to the bottles and cans being disposed of in special recycling machines.

"The government has estimated the cost to be about US $600-700 million," says Scherer. "We feel it would be much higher. Considering the fact that there are possibly 15 billion cans and bottles, the cost is more likely to be in the region of US $2.8 billion," he claims, issuing a veiled threat: "We will be left with no option but to pass it on to the consumer."

The government is enforcing the measure because the percentage of refillable containers has fallen below the minimum target level set in 1997. The system, which is meant to give a fillip to the recycling process, is the brainchild of Germany's environment minister Juergen Trittin. He is a member of the Green Party, a junior coalition partner in the government, and has been pushing for its introduction for almost a year.