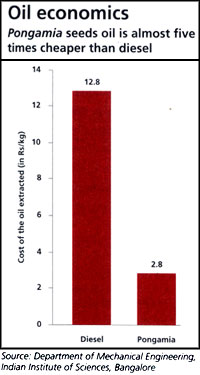 Though efficiency of this oil is about 20 per cent lower than that of diesel, countries such as Australia and Fiji are switching over to it as a diesel substitute. Udupi Shrinivasa, coordinator of the Sustainable Transformation of Rural Areas programme (SUTRA), run by the Indian Institute of Sciences, Bangalore, is optimistic that the oil would be a practical and inexpensive substitute for diesel. This would help meet the power needs in rural areas effectively.

SUTRA has devised another method of rural electrification through biomass gassification. For this, the organisation plans to grow 'energy forests' in villages. According to Shrinivasa, nearly 12,000 people in Kunigal taluk in Tumkur, own about 6,075 hectare of land that is adequate for growing Pongamia. One tree produces between 9 and 90 kg of seeds. Nevertheless, further studies are required to find out the growth pattern of these trees in the area.

Shrinivasa says that for effective production of this oil, each household needs to grow 20 to 30 trees. He calculates that with a 15-year maturity level, these trees, assuming a planned method of educated propagation by the villages, will help produce 120 units of electricity per household each month.

Biodiesel, or fuel from renewable products, is not a new concept. In the 1900s, Rudolf Diesel, the father of the diesel engine, had himself experimented with vegetable oils for running an engine. Indian scientists also experimented with vegetable fuels in the 1940s. However, with rapid industrialisation during that period and easy availability of petroleum-based fuels, the research was sidelined.

With the dawn of the 1970s fuel crisis, the international community once again felt the need to look for alternative fuels. At that time, studies were initiated in western countries to produce fuel from vegetables but with not much success. These days, engines run at about 2,000 revolutions per minute (rpm). The high viscosity of vegetable oils, however, causes problems in fuel pumping, atomisation and fuel jet penetration. Further, slow-burning characteristics of these oils can produce smoke and oil contamination.

But most of these problems do not occur with Pongamia oil. Shrinivasa says that the oil is smokeless. The only problem with the fuel is that the fuel injector will require repeated cleaning in order to reduce the viscosity. As there is no shortage of manpower in developing countries like India, this problem can also be taken care of easily. So while western research needs to improve the quality of oil and engine fuel system for their needs, simple filtering will suffice in villages, if people clean the injectors frequently. Though the oil can be heated to reduce viscosity, it contains wax and gum that could pose problems for the engines in the colder belts of India.

SUTRA plans to reduce the dependence on imported oils. Pongamia oil, however, cannot make much dent on India's oil pool deficit or even on the country's petroleum policy. Therefore, the programme aims at developing rural fuel alternatives from Pongamia oil and fuelwood.

At present, whether the growth can be sustained is being seriously discussed, says energy expert Amulya Reddy. A family land needs a rational cropping mixture that might not allow them space and time to grow Pongamia. Moreover, for successful implementation of this method, it is important to collect one-year data on the relative performance of this fuel, apart from reviewing the scientific process. Meanwhile, Shrinivasa has filed a patent in India on the commercial use of Pongamia oil for this method of electricity generation.

Scientists have also tested the method to produce electricity from biomass such as leaves in the same taluk. SUTRA's other components are overall socio-economic and ecological benefits to local communities as well as to provide an energy alternative and natural resource base nationally. The Union ministry of non-conventional energy sources has already allocated Rs 2.78 crore for a pilot scheme in 15 villages, which is expected to be used in the next three years.