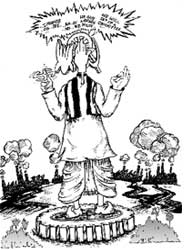 a few days before the United Front (uf) common programme was to be released, the Union minister for environment and forests, Saifuddin Soz, in an interview told Down to Earth that the uf has a separate section on the environment. However, the common programme and the joint policy declaration of the uf gives the indication that environmental issues are not on their priority.

The main architect of this common programme, Madhu Dandavate, the veteran Janata Dal (jd) leader, who is also the deputy chairperson of the Planning Commission, dismisses this omission as of minor importance saying that "the document was brought out as a technicality. It is not the uf manifesto. It is a common policy statement that will be brought into effect after uf comes to power.It does not go into the details of each issue". He said that each party would go into the details of environmental issues in their respective manifestos. However, the manifestos of some of the main uf constituents such as Left Front and the jd do not really address environmental issues.

The Communist Party of India - Marxist (cpi-m) manifesto argues for sustainable development programmes, but only suggests four piecemeal measures and not concrete programmes to achieve them. It calls for "an environmental policy which is integrated with the needs of rapid and sustainable development", stringent action against contractors who cut forests illegally, uniform national rehabilitation policy for people displaced by development projects and a mass transit and public transport system to curb vehicular pollution and stringent control over industries using hazardous technology affecting the health of workers and the neighbourhood. But even to these piecemeal measures, the cpi-m 's lack of seriousness is evident. Admits Tapan Sen, the national secretary of Centre for Indian Trade Union (citu ), the trade union wing of the cpi-m , that citu is not is pressurising the employers in polluting units to move towards a pollution-free technology. "Technology is the jurisdiction of the employers. The trade union has no say in this matter. It is now becoming a trade union agenda for the newly set up industries rather than the old ones," says Sen.

The jd manifesto is even less forthcoming. It says "the development programmes must be in harmony with the environment and the planning process must ensure long term security for ecology, livelihood and community life for all sections of society" and that the jd "recognises the need to review and amend all laws which thwart the customary rights of the rural poor over environmental resources". However the jd shirks from giving any concrete promise and programmes.

In a separate section on environment, the Congress party promises to delegate some of the environmental management functions to the states. It also promises to ensure that "environment and development go hand in hand". It attempts to appease the various kinds of voters - those displaced by the deve-lopment projects by promising "effective relief and rehabilitation measures and resettlement programmes" and by protecting workers "affected by judicial rulings on polluting and hazardous industries". But notwithstanding these promises, when in power, the party has done precious little to actually deal with these issues.

The Bharatiya Jan-ata Party (bjp) is the only party which has a detailed section on environmental issues and its strategy to deal with them. It also attempts to cater to the needs of the wide constituencies - rural and urban people, tribals, fisherfolk, industry. Calling for a healthy balance between the development needs and preservation of the natural resources, the party calls for developing sustainable cities with special emphasis on urban planning, safe drinking water and optimum use of natural resources like water through recycling, better management and harnessing of rivers as well as ground water. It also talks about protecting the rights of tribals by involving self governments such as panchayats, nagarpalikas and zilla parishad in the implementation of the National policy on environment, deny exploitation of offshore resources especially marine life, by big trawlers and a ban on the import of hazardous waste.

In an attempt to woo the industry, the bjp manifesto promises to bring back the controversial proposal of giving state forest lands to the industry. Says the manifesto: "The cornerstone of the bjp's forest policy will be a part of the total framework of land management, adoption of a dynamic programme of productive forestry and moving to private management in forestry from total state management of forests." "We have many fallow lands. We can provide lands to the industry for afforestation under certain conditions," said Ramkirpal Sinha, secretary, bjp central office.