Will the European Green parties' long agenda to change the world's environment have any takers? 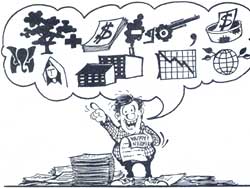 The Greens in the European Parliament have asked the European Community to cancel the debts of poor countries, to safeguard the planet's ecological balance, and generate sustainable forms of development. Holding the IMF and the World Bank responsible for creating a scenario in which, for over five years, the net capital flow has been from the poor South to the rich North, the 75-point Green Agenda prepared for the Rio Summit enjoins the European Community (EC) to set up an International Trade Organisation to replace GATT. The agenda asks for a reversal of North led "development", which it says has made the poor poorer and the rich richer by destroying traditional economies of the developing countries.

The document states that the EC should take the initiative to form a new United Nations Environment and Development Agency (UNEDA) to administer a Global Environment Fund of $125 billion. This money could be raised through eco- taxes on non-renewable energy use and carbon dioxide emissions in rich Northern countries; increasing the official development aid from current average of 0.38 per cent of GNP to 1.1 per cent; and, a transfer of 10 per cent of present annual military expenditure. The management of the fund should be decentralised.

The Agenda calls for new mechanisms to manage international financial relations taking into account social, ecological and democratic criteria. Stressing the important role of women in ecodevelopment, it emphasises that development aid should urgently promote women's access to education. Involuntary sterilisation programmes and the use of women in developing country to test new reproduction techniques or contraceptives ought to be prohibited as violations of human rights.

The Greens are firm that the demand by the South for technology transfer must not serve as a pretext for sale of patented life forms in exchange for purchase of Southern genetic resources. Arguing that ecological farming must become the rule and not the exception, the agenda is against all forms of dumping. The Greens call for a total rejection of the form of development promoted by the North "that has brought unprecedented environmental disaster."

But who will decide what is maldevelopment or who will implement their proposed agenda? The Greens have no answer.