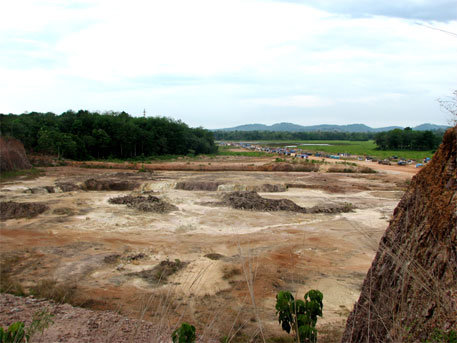 The southern Bench of the National Green Tribunal (NGT), on Wednesday, cancelled the environmental clearance given to the controversial international airport project in Kerala. The project is under construction at Aranmula in Pathanamthitta district. The tribunal, at Chennai, ordered KGS Group, the promoters of the project, to stop all the construction and related activities at the project site. The project was given clearance by the Union Ministry of Environment and Forests in November last year.

The ministry had cleared the Rs 2,000 crore greenfield airport in December last year, based on the recommendations given by its Environmental Appraisal Committee. The clearance meant rejection of all the objections raised by the local communities and several organisations, including environmental groups, in the state." The proposed airport violated many rules and laws, including the Kerala Conservation of Paddy Land and Wetland Act 2008, Kerala Land Reforms Act, 1963, Environment Protection Act, 1986 and Land Acquisition Act. Construction of the airport could result in diversion of course of water which runs through the Pampa river," says K P Sreeranganathan, local resident and one of the petitioners in the Green Tribunal.

A major portion of the 200 hectares proposed site consists of paddy fields and wetlands. It also consists of hilly areas and a stream on which local farmers depend for agriculture. Developers, however, claim that the Aranmula airport is the first private international greenfield airport in the country. KGS Aranmula Limited is the consortium which is developing this project.

"The tribunal cancelled the environment clearance based mainly on three reasons," says Harish Vasudevan, a green lawyer actively involved in the legal battle against the project."The tribunal accepted our argument that the private agency, Envirocare, which conducted the Environment Impact Assessment study for the company lacked expertise to do so."

The bench has also ruled that the public hearing for the project was not done in the required manner and company failed to give an exact account of the response of the local communities on the project.

The court observed that the promoters have not even mentioned about paddy fields, hilly areas and streams in the promised site. The tribunal has criticised conversion of wetland and paddy fields into an industrial area for the sake of the project. The ministry's Environmental Appraisal Committee failed to look into these issues. 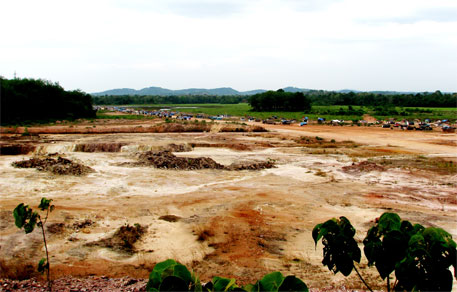 Religious concerns
Another reason for the agitations is that Aranmula, a global heritage village recognised by the Unesco, has an ancient Krishna temple. The mast height of the temple will have to be brought down if the project has to be implemented and without to avoid obstruction to the flights. Aranmula Heritage Village Protection Action Council and political parties such as Bharatiya Janata Party have been opposing the project on the environmental and heritage grounds.

"This is a victory of the concerted and continuous efforts of the people as a number of organisations had come together to fight against the project that would have caused significant environmental and ecological damage," says famous poet Sugatha Kumari, who is on the forefront of the agitations against the project.

"The Green Tribunal's verdict on Aranmula project is a strong warning against those who flout rules and disregard the environment and ecology  in order to achieve something they desperately need," V M Sudheeran, Kerala Pradesh Congress Committee president told media persons in Thiruvananthapuram.

Setback to the state government
The verdict is a major setback to the Congress-led Oommen Chandy government that has been pushing the project since 2011 and gave a No Objection Certificate to the central government.

The affidavits submitted by the Kerala government in the tribunal also did not tell the true story and ground realities about the environment and ecology of the proposed site," points out C R Neelakandan, a well-known environmentalists.

The clearance for the project was first given by the Left Democratic Front (LDF) government led by V S Achuthanandan in October 2010. Without taking the local communities into confidence, the site was notified as an industrial area. The local residents in three affected villages came to know about the project only when their land with title deeds was notified for acquisition.

Later, the Congress led-United Democratic Front government which came to power in May 2011 moved forward with the project even when a Legislative Assembly Committee had raised objections against the project in March 2013.  The committee observed that 80 per cent of the land earmarked for the project was
paddy fields. Conversion of paddy fields would impact the remaining wetlands, disturb the food chain, and accelerate the depletion of fish resources as well as other flora and fauna in the Pamba river basin. Te Kerala State Biodiversity Board too had expressed its reservations on the project.

The project that started as a private project was converted as a public-private partnership project in the wake of the agitations. The state government has bought 10 per cent of the stakes of the consortium that is led by KGS Group and Anil Ambani's Reliance Group.  The KGS Group has 51 per cent and Reliance has 15 per cent stake in the consortium.

"This was to give undue concessions to the project in the name of public partnership," says Neelakandan.

In November 2013, the Department of Revenue (DoR) Central Board of Excise and Customs issued a report stating there was "no urgent requirement" for the development of the Greenfield International Airport at Aranmula. In December 2013, the central government granted "in-principle" approval for the new airport. As per Greenfield Airport Policy, 2008, Airport Authority of India (AAI), the state government or any other entity can submit application for setting up of a green field airport. The airport has faced objections from multiple sources, including that it violates the policy of not allowing a new green field airport within 150km of an existing airport. "The proposed site locates at a distance less than 150 km from both the Cochin International Airports as well as Thiruvananthapuram International Airport," said Neelakandan. The Indian Parliamentary Standing Committee on Transport, Tourism and Culture has already recommended the development of the airport not go ahead.