Raises hope of residents, activists who have been opposing the clearance given to the project 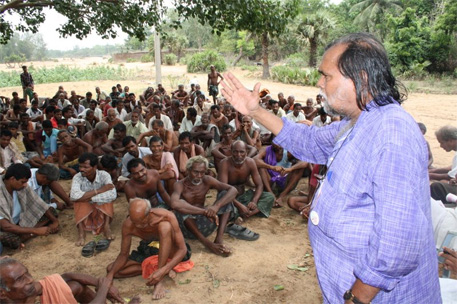 “The Forest (Conservation) Act does not have any provision on two-stage forest clearance. It will have a far-reaching effect,” said the bench headed by NGT chairperson Justice Swatanter Kumar. NGT’s observation has rekindled the hope of residents of Dhinkia, Nuagaon and Gadakujang gram panchayats of Jagatsinghpur district in Odisha, who have been waging a battle against the project.

In spite of the opposition, work on construction of boundary wall around the project site has already started.

The steel giant had earlier proposed a 12 million tonne per annum (mtpa) steel plant. But later the steel company had sought at least 1080 hectares (ha) of land to start construction on an eight mtpa plant. The $12 billion steel plant project of POSCO is billed as the country's biggest FDI project.

The initial environment clearance to the plant was granted in 2007 by MoEF. Following allegations that the ministry had not adhered to Forest Rights Act, MoEF set up the N C Saxena committee in July 2010 to review the clearance. Despite the committee’s report indicating that provisions of the Forest Rights Act had been violated, MoEF issued final order on January 31, 2011 and gave environment clearance to POSCO.

“The present appeal against MoEF’s clearance to the steel project was filed before the National Green Tribunal (NGT) Act of 2010 and challenges the final order of the MoEF, which imposes additional conditions to the original environmental clearance granted in respect of steel-cum-captive power plant project,” said Prafulla Samantray, president of the state unit of Lok Shakti Manch and the complainant before NGT.

“We hope NGT will cancel the environment clearance given to the POSCO project by the state and Central government,” added Samantray.

He reiterated NGT’s observation and said there is no provision for two-stage forest clearance. Presently, the practice followed by the MoEF is that it grants two-stage approval to a project and it is left to the state government concerned to pass a final formal order of forest clearance and the NGT has rightly questioned this move of the ministry, said Samantray.

POSCO had signed a memorandum of understanding on June 22, 2005, for a 12 million tonne capacity steel plant near the port town of Paradip in Jagatsinghpur district. MoEF had given a final green clearance to the project after the state government claimed that no traditional forest dwellers were dependent on or cultivating land in the proposed project area. The five-year pact it signed in 2005 expired in June 2010, added Samantray. On May 28 last year, the NGT had ordered that status quo be maintained regarding cutting of trees at the project site.

“Earlier in 2010 year, Saxena committee and Meena Gupta committee in their reports said that the state government had violated provisions of the Forest Rights Act in these areas. But now the government with an ulterior motive is trying to hand over land to POSCO,” added Samantray.

Angry anti-POSCO groups
“We will not give an inch of our land to establish the steel plant,” said Sishir Mohapatra, general secretary of POSCO Pratirodhaka Sangram Samiti (PPSS).

The acquisition of the land for the project is not only affecting the financial condition of the locals but also robbing them of their only means of survival. “Apart from victimisation of the local people, the income levels of the affected families will also go down as they will be displaced from traditional occupations,” said Mohapatra. Criticising the state government for kneeling before the multi-national company POSCO’s anti-people terms to establish a steel plant over the betel vine farms and agriculture lands, he said, “People of this area have been fighting against POSCO for past eight years. But the chief minister is yet to visit this place to listen to the grievances of the people. Naveen Patnaik should understand the mood of the people before trying to acquire their lands.”

Last year, the villagers of Dhinkia gram panchayat, the epicenter of anti- land acquisition movement, had organized palli sabha and passed a resolution staking claims over the land they had occupied for decades, their traditional dependence on the forestland, their eligibility for rights under FRA, and their refusal to grant consent to the proposed diversion of 342 ha of forestland for POSCO. Its initial requirement for the 12 million tone capacity steel plant was almost 1600 ha of land in three gram panchayats of Dhinkia, Gadakujang and Nuagaon.

The Forest Rights Act
“According to the Act, no forestland can be given to anyone until all the rights of the people in the area are recognised, settled and their consent is obtained for the project. This has clearly been stated under law and acknowledged further by an environment ministry order dated August 3, 2009,” said Manorama Khatua, an anti-land acquisition supporter and resident of Dhinkia.

"The Scheduled Tribes and Other Traditional Forest Dwellers (Recognition of Forest Rights) Act, 2006 (FRA in short) is a result of the protracted struggle by the marginal and tribal communities of our country to assert their rights over the forestland over which they were traditionally dependent," said Chita Ranjan Swain of Dhinkia.