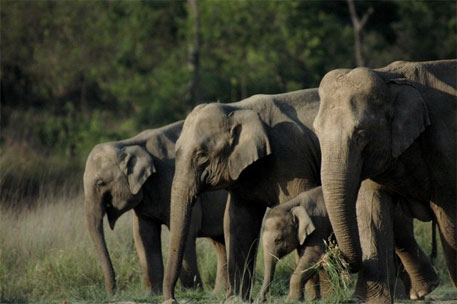 The National Green Tribunal (NGT) on April 28 stayed the construction of a concrete wall in Rajaji National Park in Uttarakhand, saying it might obstruct the movement of elephants. The state irrigation department was building the 2-km-long wall along the Song river to protect an adjacent village from flooding.

Earlier this month, Delhi non-profit Social Action for Forest and Environment (SAFE) filed a petition against the construction work before NGT. Vikrant Tongad, president of SAFE, contended in the petition that the wall was being built in the Motichur Gohri Elephant Corridor, identified as an important elephant corridor by the Elephant Task Force of the Union Ministry of Environment and Forests in 2010. The corridor is also used by other wildlife, including tigers. “The Gohari corridor is already fragmented and any further disturbance will destroy this corridor completely. This act of the irrigation department will further increase the man-animal conflict in this area,” notes the petition.

The organisation has pointed out the construction is illegal despite being permitted by the director of Rajaji National Park, because the non-forest use of the forestland has not been approved by the state or the Central government.  As per the Forest Conservation Act of 1980, any non-forest use of forestland requires prior approval from the Centre. The organisation pleaded the tribunal to direct the state and Central governments to remove the wall and restore the area to its original position and take action against those who have violated the laws.

NGT has asked the governments to maintain a status quo on the construction of the wall till May 5, when the next hearing is scheduled.

Order: National Green Tribunal order regarding permission granted to construct a wall by the Conservator of Forest/Director, Rajaji National Park, 28/04/2014