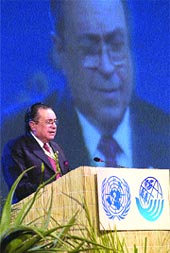 The Costa Rican constitution is set to undergo an environment-friendly makeover. In a significant move, President Abel Pacheco has proposed establishing the right of the people to a healthy environment at the same time laying down their obligations in this regard.

Pacheco reveals that the proposal has been prompted because of "deterioration of the ecosystems, the lack of policies and legal instruments to protect the environment, and the non-existence of environmental planning". The proposed reform will give the public the right of recourse to the law to defend and protect the new constitutional provisions.

It would also recognise the power of individuals to have access to justice in case of environmental conflict. In such an event, it provides that the collective interest is above that of the individual or even that of the state. The text has been sent to the legislative assembly, which is expected to take 10 months to reform the constitution.

If the proposals are approved, they will add to Pacheco's already green credentials. Under him the administration has created a new national park, lowered the boom on illegal logging operations and placed a moratorium on new open pit gold mines in this central American country.