Greenland gets even colder 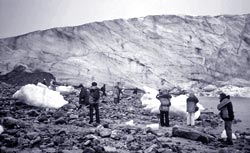 in stark contrast to warming trends observed in many other parts of the globe, Greenland is significantly cooler today than it was 40 years ago. Meteorological data collected by Danish researchers shows that average temperatures in the southern part of the island fell by 1.29C during the period 1958 to 2001. Globally, temperatures have increased by 0.53C over this time span. Edward Hanna, a scientist at the Institute of Marine Studies at the University of Plymouth in the uk, believes the cooling trend, particularly in south-western coastal Greenland, is due to the increased phase of the North Atlantic Oscillation (nao) over the past 35 years. The nao is a recurring natural pressure pattern that greatly influences the weather over the region. The findings indicate that global warming is not uniform," avers Hanna.

But experts had previously reported thinning of the island's icesheet. Hanna attributes this ice melting to temperatures in the region increasing only for a short duration. Greenland covers more than two million square kilometres of the Earth's surface, and 85 per cent of this area is covered by ice.