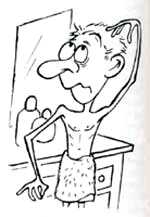 Australian researchers reported in January that a gene for a vitamin D receptor was a possible culprit behind osteoporosis, a disease that causes the bones to become brittle. Now, a clinical study at a hospital in Bangor, Maine, has found a marker for another bone disorder, osteopaenia (bone thinning). The telltale clue: greying hair (Science, Vol 266, No 5184).

Clifford Rosen and his colleagues at Bangor's St Joseph Hospital found that of 36 patients with thinning bones, half had prematurely grey hair. On the other hand, only 5 of 27 normal people studied had early greying, which suggests that people with premature greying were 4.5 times more likely than others to develop this disease.

Rosen claims that this is the first study to suggest a link between greying hair and thinning of bones.