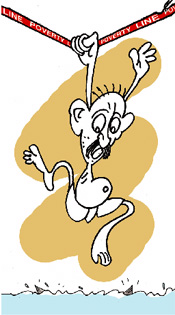 parshit Kurmi, a daily-wage labourer in Delhi since 1991, was puzzled when he was told that the government's latest estimate had found poverty levels were coming down. For the past 16 years, Kurmi's life has been uncertain as he struggles to survive. "In Delhi, I earn more, but am poorer because I spend cash on everything," he says. The government has a different take. According to the new poverty index, Kurmi is neither poor in Delhi nor in his native Chhattisgarh. Unsurprisingly, government statistics don't cut any ice with him. "Since 1991, I have been hearing that poverty has gone down. But in the village most people have become poorer," he says.

The new poverty line for rural India is Rs 356 a month and Rs 538 a month for urban India. Those spending less are categorised poor. This means Kurmi's daily bus fare suffices to keep him above the poverty line. "Most people in a village spend Rs 356 a month.So, who are the poor? Poverty in my state has not reduced," Kurmi argues. Despite the low base fixed by the government, a large chunk of population is still below the poverty line. (see table Thin trickle). And poor residents in the poorest states, like Chhattisgarh, will continue to be poor for a long time. 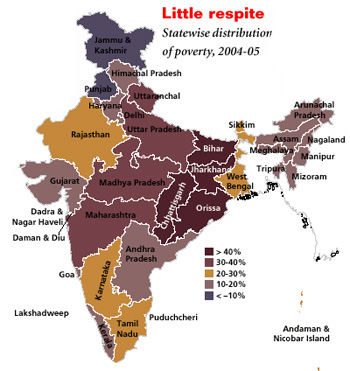 The Planning Commission's new poverty estimate, based on the National Sample Survey Organisation's (nsso's) 61st round of survey on consumption expenditure, has a critical significance. There are two methods nsso uses the uniform recall period (urp) for consumption is based on a 30-day recall for all heads, while the mixed recall period (mrp) fixes 30 days for food and 365 for other commodities. The two estimates can be compared. In the pre-reform period, the commission's estimates of 1983-84 and 1993-94 used the former, while in 1999-2000, well into the reform phase, it used the latter. The latest estimate for 2004-05, used both, which makes it ideal for a comparative study over time of the impact of economic reforms on poverty alleviation.

The current estimate shows that even while poverty is lessening, it is becoming more chronic in states with a history of poverty the poorest cannot move out of the poverty trap. India had 301.7 million 'poor' people in 2005, using urp figures, according to the new estimate. Of these, 72 per cent were in rural areas. More than 57 per cent were concentrated in five states Maharashtra, Uttar Pradesh, Madhya Pradesh, Bihar, and West Bengal. Uttar Pradesh had the largest number of poor with 59 million below the poverty line. In Maharashtra, Orissa, Rajasthan, Uttar Pradesh and Madhya Pradesh poverty has increased during 1993-2005 while in Madhya Pradesh, Chhattisgarh and Orissa the number of rural poor has increased. Orissa has the largest percentage of poor (46.4) followed by Bihar (41.4), Chhattisgarh (40.4), Madhya Pradesh (38.3 per cent) and Maharashtra (30.7). As in earlier estimates, the south has shown improvement (see map Little respite).

On balance, it appears that low inflation in rural areas, not high growth, has reduced poverty. The poverty rate has come down under both mrp and urp surveys. The former recorded a faster decline. The absolute number of poor people (using urp) declined to around 301.7 million in 2004-05 from around 324 million in 1993-94--a decline of about 23 million over 11 years. "Poverty has come down approximately by 0.8 per cent each year during 1999-2005," says a Planning Commission official involved in preparing the estimates, adding "Low foodgrain prices are one of the major reasons." 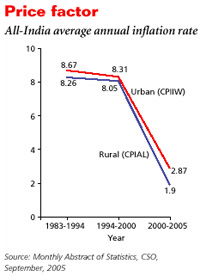 "In Orissa, there has been large-scale distress exodus of people (mostly schedule tribe/caste) from agriculture. Most of them are in petty non-farm jobs," says Sakti Padhi, director of the Bhubaneswar-based Naba Krushna Choudhury Centre for Development Studies. Also, due to regular drought, there was large number of relief work involving manual work.

Trends in relative prices show that price of foodgrains and in the primary sector generally increased significantly over 1994-95 to 1999-2000 and started declining drastically in the period 2000-05. Prices came down by more than half during 2004-05, the year of the survey.

Since the poverty estimate is based on consumption expenditure and food price is a major factor, low inflation may be the factor that makes the crucial difference. Inflation in rural areas was around 8.3 per cent during 1983-94 period and 8.1 per cent during 1993-2000. But it fell to 1.90 per cent in the period 2000-05.

A few states have more poor people and most of them are chronic cases. Poverty is assuming distinct geographical contours. The chronic poor are defined as those who always remain poor. States with a history of poverty are those least able to alleviate it. Seven states and a Union territory--Bihar, Chhattisgarh, Jharkhand, Madhya Pradesh, Maharashtra, Orissa, Uttar Pradesh and Dadra and Nagar Haveli--have more poor people than the national average of 27.5 per cent. Of these, 40 per cent or more are below the poverty line in four states. "Poverty is getting concentrated in a few places, but it still exists in states that have higher growth rates," says Biraj Patnaik, principal adviser to the office of the food commissioners, Supreme Court of India. 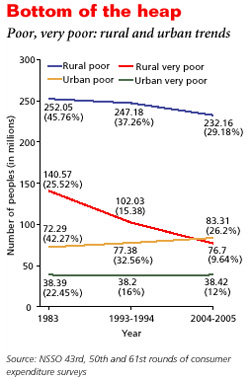 The rate of decline has been comparable during pre-reform and reform phases.

Chronic poverty is also getting concentrated in specific states and areas. The percentage of very poor in the total population declined in all states since 1983--except Orissa between 1983-94 and 2004-05. However, the percentage of very poor is higher than the all-India figure in Bihar, Madhya Pradesh, Maharashtra, Orissa, Tamil Nadu and Uttar Pradesh. Orissa had 2.5 times very poor people than the national average. The share of Bihar, Madhya Pradesh, Maharashtra, Orissa and Uttar Pradesh in the total of very poor people rose from 57.5 per cent in 1983 to 66.8 per cent in 1993-94 and 70.6 per cent in 2004-05.

The current survey says though overall inequality has lessened in comparison to 1993-94, it has not improved the lot of the poorer half of the poor. Other indicators show the decline in the poverty gap was slower in the reform period than the pre-reform period.

A Planning Commission official refused to reply to a question on the impact of growth on poverty. "We have not studied the link," the official said. Going by an analysis of growth in the reform phase by Dev, growth has been found to be a limited factor in poverty reduction. "If distribution had been the same, poverty would have been reduced by an additional 2.8 per cent in rural areas and 4.32 points in urban areas in the reform phase," he argues. That means around 9 million people could have been lifted above the poverty line if inequalities had been corrected.

In 13 states the impact of growth on poverty has been negatively affected by distributional inequalities, especially in Kerala, Gujarat, Himachal, Orissa and West Bengal. Researchers from 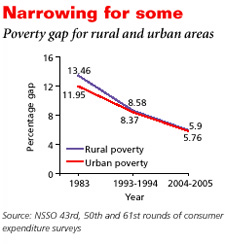 jnu found inequality either increased or the decline was slower in 13 out of 17 states during 1993-2005. In 10 out of 13 states, it rose in rural areas. Inequality was higher in urban than rural areas in all states.

In 2002, economists Jean Dreze and Angus Deaton found that regional disparities were prominent with the west and south doing well and the east and the north lagging in the 1990s. They found inequality within states, between rural and urban areas. In terms of growth in monthly per capita consumption expenditure (mpce), there was a wide variation among states in both pre-reform and reform phases.States with more poor people reported slower growth in mpce. The growth rate was higher than the national average in 10 states in rural areas and 11 states in urban areas in the reform period compared to the pre-reform period. The growth rate for poorer states declined.

Another concern relates to the widening disparities between rural and urban areas. Rural mpce as a percentage of its urban counterpart declined from 66 in 1983 to 61 in 1993-94 to 56 per cent in 2004-05. The lowest and highest percentages were recorded by Madhya Pradesh (45) and Kerala (91).

No, is what many experts say. India's poverty line is fiercely contested. The current one was defined in 1973-74 as the expenditure needed to consume 2,400 and 2,100 kilocalories a day for rural and urban people. Since then, government just updates the monetary value based on price indices. The update doesn't account for food habit changes. "The estimate does not reflect the ground reality. The methodology of gathering data on consumption patterns must also be changed," says Saxena.

One problem is that the government doesn't take note of the changing prices of different constituents of the food basket. While at 1973-74 prices, the official poverty line corresponded to a daily calorie norm of 2,400 and 2,100 calories, this was not the case in subsequent periods, leading to a wide divergence between expenditure- and calorie-based poverty rates. One reason for this was a switch away from cereals, combined with a switch from food to non-food items. Another reason was more restricted access to common resources for the deprived. "Poverty estimates are a starvation line estimate," says Patnaik.

This price-calorie change means that an average person just above the poverty line falls short of the caloric norm by about 22 per cent in rural India and 9 per cent in urban India. If this reality had been factored in poverty estimates would have been much higher, even leaving out the government's failure to factor in non-food expenditure.

The calorie measure, too, is contested. The Indian Council for Medical Research says a person doing heavy manual work should consume at least 3,800 calories a day. Delhi-based Centre for Policy Alternatives says the poverty line should be pegged at a per capita monthly expenditure of Rs 840. Only 10 per cent of people can manage this.

Poverty in rural areas has fallen faster. The urp estimate shows rural poverty fell from 37.3 per cent in 1993-94 to 28.3 per cent (-9.4) in 2004-05, while urban poverty fell from 32.4 per cent to 25.7 per cent (-6.7). The mrp estimate shows rural poverty fell 5.3 per cent to 21.8 per cent while it fell 1.9 per cent to 21.7 per cent in urban India. "Misplaced perceptions of fiscal constraint prevent the government from increasing public investment in anti-poverty programmes despite favourable macroeconomic conditions," says C P Chandrasekhar, Centre for Economic Studies and Planning, jnu. The total money needed to bring everybody just above the poverty line, assuming no distribution costs, will be Rs 57,000 core a year. This is 25 per cent of what it costs to maintain the Indian bureaucracy.

That will remain a big ask until the government admits more realistic ideas of what it takes for a person to survive with basic needs and some dignity.